Pakistan, as a developing country, faces acute water shortage. Pakistan has always been portrayed as a water scarce country, however, water scarcity and water security are different terms in that Pakistan does have renewable water resources and it is water-rich country, however, it needs better infrastructure and better policy implementation. Therefore, rather than water scarcity, the problem lies with managing water demand and producing more from each drop of water. Currently, Pakistan scores well on its agricultural, domestic and industry sectors being high on the World Resource Institute’s water stress index. This issue is not only restricted to the high-water demand in rural/urban areas, but also includes issues of water contamination and water borne diseases. At least three quarters of Pakistan’s population lacks pure drinking water. Although, Pakistan has already hit the ‘water scarcity line’ in 2005, yet environmental authorities and the government ignored this problem for too long and it has now become a major concern. Therefore, this report aims to critically review the problem stream, policy stream and political stream regarding water security and development in Pakistan, followed by exploring the root causes that contribute towards the problem of water shortage and security. The issue was then highlighted by various policy analysis tools. Subsequently, this policy analysis evaluated a set of effective policy alternatives using the Policy Delphi survey and certain assessment criteria such as efficiency, political feasibility and implementation, in order to explore the best practices and solutions available to tackle this problem.

The findings highlighted several major causes of water scarcity including lack of governmental initiatives to avoid underpricing of water that only allow covering almost a quarter of its annual operating costs in Pakistan, poor management as massive consumption of water in agricultural sector remains untaxed and highly unregulated, rapidly increasing population, insufficient reservoir storage to store the right amount of water as per demand graph, unjustified construction of dams for hydropower generation as it reduces the flow of water to the sea which is already at unsustainably low level, climate change since melting glaciers, concentrated rainfalls, shortening of winter season and higher temperatures due to global warming ultimately result in increasing demand and water evaporation, water wastage as 40 million acres of water and 30 million acres of floodwater are wasted because of few dams or low storage capacity, and the water politics since India has been found violating the Indus Water Treaty several times by constructing dams on western rivers and using much of Pakistan’s substantial share of water. Furthermore, the analysis conferred certain possible effects of water scarcity and security issues including destruction of ecosystem, breakdown of agriculture economy, depletion of basic resources, non-availability of safe water, drought and famine. According to the influence map results, Pakistan’s Council of Research in Water Resources (PCRWR), was found to be the major policy actor in affecting the policy process and being responsible for data collection regarding this issue. Secondly, there came government authorities for ensuring better relationships with India, United Nations for support to yield a desirable solution, and landlords playing a major role in resisting imposition of water tariffs and developing a better water management system. However, Pakistan’s foreign policy makers, environmental authorities, industries and households were found to be having the least impact on shaping of such reforms. However, according to the survey results, around 25% of the sample did not have enough knowledge about the prevailing problem of water scarcity and among them, most of the respondents did not know the difference between water security and water scarcity. Moreover, it was found that no action at this point would lead to absolute scarcity of water in Pakistan in seven years, therefore, the more immediate the action is taken, the easier it would be to restore the environmental resource with less costs. Therefore, the study proposed significant policy alternatives in the broader context including awareness about water wastage, pricing of water and E-Governance to cover the administrative cost by determining the water demand in different regions and prioritizing allocations, building dams to store the water that goes unused into the sea, efficient utilization of IMF Funds to get maximum benefit, and getting control of western rivers. However, evaluation of alternatives suggested to solve the issue of water security using a coercion theory principle because the problem of water security leads towards water scarcity problem, therefore, it was found feasible to move from least coercive methods to most coercive methods having administrative and political implementation. The ideal solution, in comparison to other alternatives and assessment criteria, was found to be creating public awareness. This approach scored well on the cost-benefit analysis as compared to other alternatives. According to the coercion theory, if creating awareness alone would not solve the problem then the use of E-Governance to manage demand of water and pricing the water beyond a certain consumption level could be the next beneficial action plans. This alternative was found suitable for both the ideological and political feasibility since reducing the wastage of water would mitigate this problem at both a micro level (water security) as well as at a macro level (water scarcity).

The study suggests that it is necessary to shift our focus towards eco-centric approaches to ensure sustainable water resources for our future generations and this planet. As an effective action plan, the government should make people aware of water scarcity and security issues and its long-term repercussions. However, data availability on the consumption of water would bring the government in more control to manage the water demand efficiently and reduce its wastage. This would incentivize people to reduce the wastage of water at an individual level. Presently, Pakistan’s budget fails to add support for environmental problems and needs international cooperation and assistance to deal with climate change issues. Over the years, the government of Pakistan has neglected this issue where they should have properly utilized the climate budget. It should get maximum benefit from the international climate funds by the United Nations and its programs such as the Green Climate Fund set up in 2010. Therefore, Pakistani governmental and private authorities need to put in more effort to overcome this water crisis, which is partly man-made. Similarly, Pakistan's leaders and stakeholders need to take ownership of this challenge and declare their intentions to tackle it. The government also needs to institute a major paradigm shift that promotes more judicious use of water and proper utilization of the climate budget. According to IMF, Pakistan needs to develop a better resource management system that would help to conserve and sustain water through cost recovery as agricultural water is highly unregulated and untaxed in Pakistan. There must be a better focus on better irrigation service delivery and water management to increase the efficiency of water usage, whereas in case of taxes, upgrading the infrastructure and bringing agriculture under tax regime, at least to cover the administrative expenses, would be a tough but a sustainable action plan. Furthermore, water tariffs for the consumption of households are very low which need to be revised. There should be high prices for water usage beyond a certain consumption level. Imposing taxes and regulation of proper infrastructure for the sustainable use of water are the kind of changes that do not require much of the government budget. Recently, the government of Pakistan has been found playing an active role in ensuring a safe environment for people which shows a positive response from the government to environmental issues that would help further this policy. Besides this, alternative policy plans to ensure water security could involve ensuring better relationships with India to get more control of the flow of water and use it efficiently for agricultural and other industrial uses. However, getting more ownership of this problem would be the ideal solution since the efficient use of water and better water management is necessary to ensure sustainable water usage. Therefore, the government needs to focus on building dams with proper planning in order to cover the variability of water flow and spending the rest of budget in bringing better infrastructure. 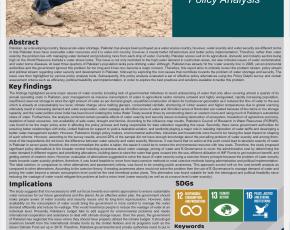