Climate change was a frequently discussed topic in 2019. Two opposing sides exist in the debate around climate change i.e. one side that believes global warming is a threat to us all and one side that believes it’s all a hoax. The main objective of this research report is to investigate and analyze the varying opinions of people around the globe regarding climate change. The preferred method to gather qualitative and quantitative insights for this project was through Twitter data mining. An approximate of 9.1 million tweets were extracted, using trending hashtags such as #ClimateAction, #globalwarming, #Greta and so on. A sentiment analysis was then carried out which examined various parameters such as the influence that organizations, politicians, celebrities, authors, activists and naysayers have on the conversation being carried out regarding climate change, the number of positive or negative tweets associated with the research topic, the top 50 words being used in the tweets and so on to understand whether the general public believes in the need for climate control initiatives and if prompt action is necessary or not according to them.

The results showed that platforms like Twitter can prove to be revolutionary in sparking debate on important topics like climate change that may not be considered important by Governments. In the climate change problem, environmental activists and other notable people used Twitter to spread their message across about the consequences of denying the climate change crisis and shaped opinions to instill both fear and hope for a better future. Further, analysis showed that people care for climate change overall and support those who take initiatives to tackle the problem. However, instead of taking self-initiatives, they look up to Federal Governments and notable personalities to lead and plan how to combat the climate crisis. For those who hold the power but do not act promptly, the public uses Twitter to show their dissatisfaction.

This research can help to understand the ways in which opinions are shaped and sentiments are cemented by examining underlying patterns reflected in free opinions of social media users. Data like this can be used to supplement marketing and promotional campaigns for brands, politicians, institutions and various social causes as well by creating a deep-rooted understanding of how people react towards and perceive certain ideas. In the context of climate change, it can be used to create content, engage people who believe in the cause and empower them to influence others by convincing the local area citizens and shaping the stance of local/federal governments, community leaders and activists to assist their cause. 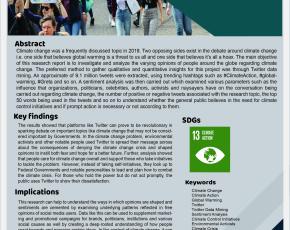