Tax and fiscal policies are key determinants for a country. Among these economic policies, amnesty schemes emerge as opportunities for the taxpayers and non-taxpayers to pay a certain amount, in exchange for relief on tax liability relating to previous tax years, without any criminal or civil prosecution. It is one of the short-term strategies which is used mostly by the developing countries for increasing tax brackets and revenue by encouraging people to declare their incomes and assets to contribute towards the national revenue. In this way, tax amnesties facilitate in enhancing tax compliance behavior among people. However, this technique is used by a few countries around the world since it is considered to be a controversial tool. Therefore, the underlying study aims to analyze the tax amnesty schemes of Pakistan and their results by comparing them with the results of other countries in order to conclude the benefits of tax amnesty schemes..

The findings revealed that the tax rates are very high in Pakistan. Therefore, people consider tax as a burden even after inclusion from amnesties. The results of the analysis on the tax amnesty schemes of Pakistan showed that by increasing the number of offered schemes, no assurance was observed that revenue and number of people who avail the tax amnesty schemes would increase. Furthermore, results of GDP ratio analysis revealed that amnesty schemes somehow helped in the generation of revenues, but the actual purpose of improving tax compliance behaviors could not be achieved. However, results of tax revenue analysis represented that even after the asset declaration schemes of 2016 and 2018, there was no increase in tax revenue. From the result of fiscal deficit analysis, it was observed that with the decline in revenues, there was an increase in expenditures. Comparing these results with the revenue generated by India and their tax to GDP ratio showed that India could also not fulfill its intended purpose which was to enhance the tax compliance behaviors among people through the continuation of tax amnesty schemes. However, Argentina’s amnesty scheme in 2017 emerged as a rare success story since the country not only managed to generate revenue from domestic assets, but also from its offshore assets.
Conclusively, it was found that the continuation of amnesty scheme did not improve tax revenue and tax compliance behavior because the amnesty schemes were found to be used for personal and political purposes more than the economic ones. In fact, this practice was not found suitable since it encourages people to wait for another scheme that might come in a while instead of filing the returns and disclosing all their assets. Secondly, it creates the problem of moral hazard among the existing honest taxpayers as repeated amnesties discourage them from paying tax punctually and encourages them to wait for amnesty schemes so that assets can be declared at a lower rate, as predicted by the history of schemes in Pakistan. Moreover, the results inferred that political uncertainty, lack of uniformity in the governance structure and the bureaucratic and corrupt systems also affected the optimal and potential tax revenue collection through amnesty schemes.

Pakistan has never focused on having structural policies that include governance and structural reforms, and methodologies that can help people in discouragement of tax evasion. Only amnesty schemes are not enough to get people into tax brackets in addition to that, there must be tools and mechanisms through which people could be forced to expose the assets. Another problem which has been observed with Pakistan is that people and politicians built offshore assets to avoid tax brackets. Therefore, steps like Argentine government should be incorporated with the scheme to avoid this practice. Moreover, the tax rates should be lowered for encouraging people to pay taxes without feeling burdened by the rates. Secondly, tax system should involve the naming and shaming processes. It has been observed that those who are caught, their prosecution and its processes are not made public, therefore people believe that they will get away with the process. Besides, it has been observed that golden cards given by FBR and other measures to encourage regular taxpayers are not enough to publicly encourage people for tax paying. There must be an Introduction of the Tax Intelligence System, according to which honest taxpayers should be given reliefs whereas tax dodgers should be dealt with strict punishment. Furthermore, instead of planning amnesty schemes to spread tax-compliance behavior, there must be asset-seizure schemes so that people should be discouraged to not disclose the income and assets. Moreover, government should make FBR a strong institution to make sure that tax is collected promptly. Along with this, it is of utmost importance that the government fulfill its duties and provide citizens with security and services that they deserve by taking aggressive steps to combat the problem of corruption. All these measures can encourage tax compliance behavior. 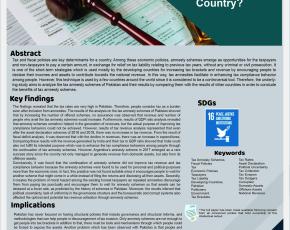