Today, the problem of fake news has become a massive one due to easier access to the internet, specifically social networking sites. Social media has become a major cause of concern since major sites such as Facebook and Twitter have disrupted the ways in which we share information and have increased the reach of the common person to a whole new audience. Furthermore, the prevalence of fake news can be categorized into misinformation, false news used to create harm, and disinformation, and false news created with the intention of causing harm. Research shows that many people have suffered directly or indirectly because of disinformation. Most of the time, fake news has even more reach than real news, resulting in many incidents of mob violence and hatred which can have serious consequences on democracy, economy and even businesses of a country. This should be considered a wakeup call for Pakistan considering that the internet usage in Pakistan has almost doubled since 2010. Therefore, this report aims to critically review the problem stream on why people believe and share fake news. Furthermore, this policy analysis will evaluate a set of effective policy alternatives, using the Policy Delphi rankings based on certain assessment criteria including efficiency, equity, welfare, liberty and security, in order to propose the best possible solutions to tackle the increasing problem of fake news in Pakistan.

In Pakistan, forwarded messages on WhatsApp and online Facebook posts with sensational headlines were found to be major channels for spreading false news. In addition to that, the results of cause analysis further introduced significant reasons for the rapid dispersal of fake news, including confirmation bias of people as people readily share and believe the news which already confirms their biases, for spreading hatred since state and non-state actors are usually found manipulating mass media in order to propagate a certain agenda, and rapid growth of the internet as the penetration of new media, particularly Facebook with no check and balance mechanism, has become a major cause for the increase of misinformation and disinformation. However, force field analysis highlighted that there could be certain driving forces for tackling fake news in Pakistan such as the prevention of hate speech, prevention of narrative formation based on misinformation and/or to stop people from making decisions based on misinformation. On the other hand, there could also be certain refraining forces including the threat of invasion in people’s privacy, high sunk cost with no quantifiable returns and threat of state’s censorship. Furthermore, the influence map results presented certain policy actors that could influence the policy process including social media companies, government, educational institutions, social media users, and media firms. Besides this, the study proposed significant policy alternatives in the broader context such as introducing a cybercrime bill that makes creation and spread of fake news punishable by law, creating an independent regulatory body that deals with the prevalence of fake news and hate speech, government enforcement on social media companies to prevent the spread of fake news and hate speech in the country, enforcing news media industry to educate the masses regarding fake news, and no action analysis. Each alternative carried certain pros and cons when evaluated, ideologically and practically. However, all the alternatives were found within the power of the government as provided by the constitution of Pakistan, so there could be no problem regarding the legality of the alternatives. Moreover, there would be little or no opposition to all these alternatives since everyone believes in the significance of a viable solution, therefore, there would be high political acceptability. According to the Delphi responses, introduction of cybercrime bill and creating an independent regulatory body were ranked first and second, respectively. However, the government was found responsible for defining the bill as clearly as possible to avoid any confusion regarding the terms. In addition to that, both alternatives would not be very difficult to implement and would have high political and social acceptability.

The study suggests that as a short-term action plan, the cybercrime bill should be introduced that will make the creation and spread of fake news punishable by law. This will discourage the users of social media from sharing fake news which will ultimately decrease the fake news stories. However, it will not be possible to completely eradicate the prevalence of fake news and hate speech using this alternative as the authorities will only be able to act against a fake news story after it has already gone viral. Therefore, as a long-term and sustainable solution for this issue, the government can enforce news media industry to inform the masses regarding the prevalence of fake news in social media and educate them about news credibility and fact checking techniques. Similarly, the government should keep pressurizing social media companies to create a permanent solution and focus on developing technology using advanced machine learning that will be able to completely eradicate harmful and fake content from their websites once and for all. Until that technology is developed, they should be asked to hire designated people who will specifically handle this issue in Pakistan. Furthermore, if people will be fined for sharing fake news, it will automatically control the issue to a great extent. 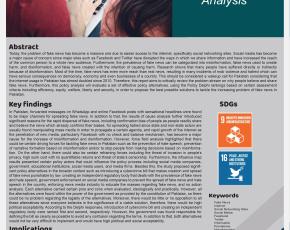