This research has focused on the effect of social media usage and social circles on a student’s academic performance. The increased use of social media applications by the younger generation, has recently become a concern, because it is felt that it adversely affects education and leads to emotional isolation. There is also the idea that the use of social media creates superficial standards of happiness and distracts the focus of students from the more important goals in life. The other aspect of the study is to analyze the friendship networks of the students and how they tie in with their social media usage and academic performance. To serve this purpose, the underlying research is mainly targeted at secondary and high-school students from both private and government schools in Lahore, Pakistan. The data was collected using a detailed survey which was designed to accumulate both qualitative and quantitative aspects. Furthermore, the techniques of regression and network analysis were used to understand different relational aspects of social media usage and social circles that can affect the academic performance of students in order to discover whether a correlation truly exists between a student’s socialization and their academic performance and if it does then whether it is negative, as is the common belief, or positive.

The analysis identified three significant reasons that can negatively affect the performance of students including loneliness as if they feel lonely, their performance can be hindered; safety as if there are problems in their lives, they will not be able to perform well; and anxiety as the more the students are anxious, the harder they will have to struggle to perform good. Furthermore, it was found that WhatsApp is the most commonly used social app, followed by YouTube. Surprisingly, the app Tiktok has a wide audience base. Whereas, Twitter, Instagram and Snapchat remain the least used apps with some people having no clue about their existence. Similarly, the findings highlighted that students mainly access WhatsApp and Facebook with their own accounts whereas no respondent has his/her own account on Twitter while Snapchat and Instagram accounts are also relatively less common. However, the results of network plots revealed that the introverts are either subjected to prejudicial isolation or they often put up with bullying and unfair treatment to retain their membership in apparently popular peer groups. On the other hand, sometimes the most socialized students are the ones suffering from loneliness which means that a student’s emotional isolation has no correlation with the number of friends s/he has.

This research can be integral in understanding behavior patterns in today’s children with regards to socialization and its affect on their academic performance, which in turn affects their future careers and quality of life. This could potentially lead administrative bodies to understand that introversion is a legitimate personality type, and a ‘healthy personality’ does not always have to be social, vocal, and popular. If this is understood and accepted promptly, it can truly revolutionize the academic system for introverted students who find themselves in a constant struggle with a system that favors the loudest by nature. In a reverse reading of the same situation, it also suggests that the counsellors, parents, teachers, and peers must not simply assume that because a child has many friends, he or she must feel happy since the case could be entirely opposite as well. 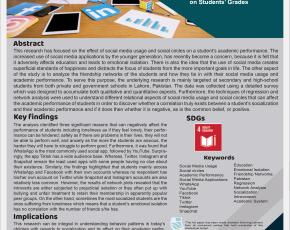