SHORTAGE OF DOCTORS IN RURAL AND PERIPHERAL AREAS: Policy Analysis

The shortage of doctors in rural and peripheral areas of Pakistan has affected people very harshly since the unavailability of basic healthcare facilities in the neighborhood has resulted in several deaths in these areas. Although the number of people living in rural areas is greater than that of urban areas, the opportunities and resources available to them are lesser than the latter. One of those basic resources is healthcare. Good healthcare is a basic right of every citizen, however, people from the rural areas are being denied that basic right because they do not have the same facilities as the people living in urban areas and as a result, they have to face a lot of health challenges. In this context, this policy brief aims to critically review the problem stream, policy stream and political stream regarding the shortage of doctors in rural and peripheral areas and its consequences for the rural class of Pakistan. To serve this purpose, data was collected through interviews and online surveys questionnaires. Subsequently, various policy alternatives were proposed and evaluated using Policy Delphi rankings and certain assessment criteria such as equity, effectiveness, cost, political feasibility and social acceptability that could be effective to mitigate the shortage of doctors in rural and peripheral areas of Pakistan.

The findings identified major causes responsible for the shortage of doctors, in rural and peripheral areas of Pakistan, including lack of growth opportunities due to which doctors believe that working in rural areas is not as profitable as working in specialized facilities in urban areas, poor living conditions as lack of basic facilities such as clean water, electricity etc. further create hindrance for the doctors to shift to rural settings, lack of quality education system and entertainment facilities for the families in rural areas, poor infrastructure of rural health facilities due to which doctors believe that their work in these facilities will not help in any part of their post-graduation experience, and poor transport facilities that make it difficult to commute between places. Further analysis conferred significant negative effects of limited healthcare facilities for the Pakistani rural class including poor healthcare services, increasing spread of diseases and inequality of rights between rural and urban citizens. In addition to that, certain policy actors were highlighted that could influence the policy process as being directly or indirectly involved with healthcare services in Pakistan including doctors, patients, citizens, government and bureaucrats. Moreover, it was found that if no new policy would be implemented to mitigate the shortage of doctors in rural and peripheral healthcare centers, then this would increase health challenges for the residents of those areas. Therefore, the study proposed significant policy alternatives for reforming the healthcare conditions of rural class in Pakistan, including privatization of medical practices in rural areas, improvement of medical infrastructure, changes to the medical curriculum, making it mandatory for the fresh medical graduates to serve a certain period of time in rural areas, giving monetary and non-monetary benefits to the doctors working in rural settings, introducing a virtual system where doctors can cater to the patients online, and no action policy. Since there were certain trade-offs between different alternatives so the decision was made considering the most important assessment criteria of security, welfare and political feasibility. Subsequently, changing the school curriculum was found to be the most viable short-term solution. Whereas, in the long-term, the policy of improving the infrastructure was ranked as one of the most efficient approach with good acceptability, but it was found having low chances of implementation due to budget constraints. However, experts believed that it would be feasible if the government could allocate budget for improving equipment. Although, experts also believed that the introduction of virtual system would solve a lot of problems regarding the healthcare services, yet one of the most important issue could be of trust factor since rural people would not trust machine but rather prefer the human element.

The study suggests that the issue of limited healthcare facilities in rural and peripheral areas can be solved, in the long-run, by changing the curriculum of the medical universities. Since doctors need to realize that the people living in rural areas deserve the same standard of healthcare as the people living in urban areas. This can be done by creating awareness in them from an early stage. Moreover, the universities can incorporate visits to rural areas and rural medical camps in their curriculum to ensure that the students get enough exposure to realize the healthcare conditions and requirements of those areas. The outcome of this action plan can be monitored easily as policy makers can check and compare the number of doctors working in rural areas after the implementation of this policy with the number they got before its implementation. In this way, the government can analyze if the policy had a positive impact or not. Similarly, the improvement of medical infrastructure will also take time to yield productive results. Firstly, the policy makers need an accurate estimate of the amount required to buy the necessary equipment. Secondly, they need time to move some money around for this alternative. After the proper implementation of this policy plan, the government can monitor results by observing the foot traffic in the new and improved Basic Health Units (BHUs) and Rural Health Centers (RHCs). In addition to this, introduction of private practice should be promoted to solve the problem in the short-term. However, this solution is not viable in the long-term because the citizens of the rural areas will have to incur external costs which will not be justified since most of the people living in rural areas do not have very high incomes. Therefore, to tackle the issue of external hidden costs, government should set a price ceiling for the doctors such as a doctor practicing medicine in rural areas cannot charge his patient above a certain amount. Similarly, government can also subsidize doctors practicing in rural areas to maintain fairness. 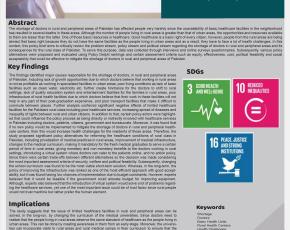