Social Media Influencers (SMIs) have access to a large audience base and the ability to convince them by virtue of identification and credibility in a specific industry. These online influencers are being used by brands either for increasing their audience base in order to gain greater online presence and recognition or for marketing to their target audience directly. SMIs can have a greater channel effect if the brand they are endorsing matches their own values and the impression they have on their audience, whereas a dissonance can cause the SMI to lose credibility as a taste or opinion leader. In this context, the underlying research aims to understand the phenomenon of influencer marketing and its complexities through different theories, especially role congruity among online influencers with a focus on investigating whether gender biases came in to play when online influencers were viewed. For this purpose, a secondary research was conducted following a heuristic systematic model and social media analysis in order to explore the effect of attractiveness on social endorsement interpreting how SMIs are created and how they amass followers around them.

The study findings depicted that in the context of influencers and endorsers, the role congruity theory was found to be applicable in fields that value certain social norms over the quality of the content produced such as in the car industry, where females are found acting differently from their male counterparts in order to align themselves with the industry norms. This showed that descriptive as well as prescriptive prejudice and a double bind exist within this industry. However, there are other fields in which both genders can easily flourish if they have the required expertise such as the fitness industry, where women and men generally follow female and male influencers respectively, which means neither descriptive prejudice nor prescriptive prejudice exists within this industry. Furthermore, the findings on Social Media Influencers revealed that SMIs gather their followers from a plethora of strategies. Most of them were found to be either opinion leaders or taste leaders. However, in professions that require high level of expertise such as sports, no difference was found between the highly attractive and the less attractive athletes. However, among athletes with low expertise, the more attractive athletes were perceived to be a better fit when compared to their less attractive counterparts. Similarly, it was found that expertise is a better match up factor than physical attractiveness for brands that are selecting credible endorsers. However, in general, both expertise and attractiveness were found to be the prime factors in deciding how effectively an endorser can drive a consumer’s purchase intention. Although results proved that expertise is valued by consumers, physical attractiveness has become one of the major factors that dictates who becomes an SMI. Moreover, it was found that social media platforms such as Instagram, an imaged focused platform, are full of SMIs that have set an unreachable precedent of beauty standards. It was found that the use of carefully curated photographs creates an echo chamber of false body ideals for followers of these SMIs, creating health risks such as Orthorexia Nervosa, reduced self-esteem, body image issues and eating disorders in individuals that use these social media platforms.

Social media influence is becoming an issue these days as before the advent of social media platforms, physical attractiveness had never awarded someone with a following so quickly and easily. Therefore, the study suggests that the problem lies on both individual and societal levels since at the present time, everyone is in a race to follow the emerging online trends introduced by striking SMIs which eventually reduces the essence of self-creativity and innovation in younger generations. Hence, a new approach to judging a person’s capability for an influential role is necessary for better development of societies. 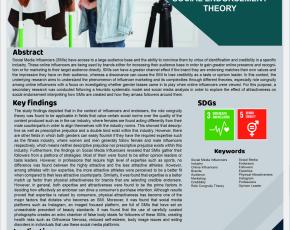