Senior citizens constitute a significant proportion of the society. In Pakistan, due to the collectivistic culture, the elderly people are supposed to be treated with utmost respect and dignity. Under article 25 of Pakistan’s constitution elderly people deserve to be treated as equals. Although, the government attempts to introduce Senior Citizens Welfare and Rehabilitation bill which makes mistreatment of elderly into a punishable offence, the government has failed in providing senior citizens with any safety nets and/or a fair chance to look after themselves. The urgency and significance of this issue must be recognized to ensure the physical, emotional and financial independence of old people since the number of senior citizens in the country is growing rapidly with the ever-increasing population rate. Therefore, this policy analysis aims to critically review the problem stream, policy stream and political stream regarding the alienation of old people from Pakistani society. To serve this purpose, data was collected through interviews and survey questionnaires. Subsequently, various policy alternatives were proposed and evaluated using Policy Delphi rankings and certain assessment criteria such as effectiveness/efficiency, welfare, equity, social feasibility economic feasibility, political feasibility and ease of implementation for the betterment of this segregated group. The investigation further involved some policies made by welfare states in Scandinavian countries (i.e. Sweden) that Pakistan could utilize as an ideal to modify and contextualize in its own culture.

Although elderly people constitute at least 7.5% (15.6/208m) of the population of Pakistan, the old age pension system had erratic welfare nets which showed that they were considered outcasts and weak (in terms of power) by the government and were not given their due share of the GDP. Moreover, the employment level of 60+ years of age was found lower as compared to that which is for younger individuals. This also showed that there was discrimination against elderly people in the hiring procedure making them unable to sustain in society with acceptable standard of living. However, the government of Pakistan introduced multiple acts to protect the elderly people from the economic, social and political injustice that they face and/or to ensure their basic senior citizens culture, financial independence, pension system, welfare, discrimination, injustice, human rights i.e. Employees Old Age Benefit Act 1976, Social Security Act 1965, the KP Senior Citizens Act 2014, and pension for government employees and government employees benevolent fund that aims to give financial stability to old people (mostly older than 60) once they retire. Moreover, the Public Sector Development Programme (PSDP) and ten years perspective plan were introduced to make senior citizen homes/community centers and/or to establish geriatric wards in hospitals, but all these efforts could not improve the status of the elderly people in community due to the lack of proper implementation. In addition to that, no social protection programme was launched by the government which could holistically solve old age issues. However, multiple NGOs were found working for elderly welfare e.g. Edhi Foundation, Old Homes, Old Age Happy Homes, The Senior Citizen Foundation of Pakistan etc., yet they had certain limitations due to funding issues, arduous bureaucratic process, no clear mandate and enhanced corruption. Furthermore, the factors including dependence of elderly on their family members for emotional, physical and financial help, additional costs which accompany old age due to health issues, loneliness affecting the mental health of elderly people, lack of federal level legislation dealing with the presence of geriatrics, the collectivistic nature of families in the country’s culture and their immense pride stigmatized taking money from the government directly through noncontributory schemes, and/or the incapability of most of the senior citizens to work due to health issues and general fatigue, were found to be making the situation critical for the old community. However, force field analysis highlighted that there could be certain driving forces for increasing senior citizen’s independence in Pakistan such as reduced mental health issues, economic welfare, sense of equality among citizens, less instances of violence, reinstatement of collectivistic cultural values, enhanced income security whereas, there could also be certain refraining forces such as state’s fiscal deficit, different priorities of the government i.e. to combat terrorism, social reluctance to involve state in private affairs, independent working system of private sector without any consensus, lack of legislation protecting old citizen’s rights and the cost of specific needs of the elderly population i.e. healthcare facilities. In addition to that, the results of impact mapping presented certain policy actors that could influence the policy process as being directly or indirectly involved with the issue of senior citizen’s independence/rights including bureaucrats, politicians, NGOs, media, military, educational researchers, elderly people and youth. However, it was found that the state, civic society and the private sector must take immediate action for the prosperity of the elderly. If they were unable to do so, 4% of the population would continue to be ostracized and remained a very easy target for physical, emotional, financial and sexual abuse which would be a direct violation of their constitutional rights of equality, protection and nondiscrimination in services/public spaces. Therefore, the study proposed significant policy alternatives in the broader context including introduction of national social security program after passing elderly bill, public-private partnership with NGOs, improvement of the existing schemes, raising awareness to support own elderly via media, cut costs from youth, cut costs from defense/military and increase in taxes. Since there were certain trade-offs between different alternatives so the decision was made considering the most important assessment criteria i.e. welfare, social feasibility and equity. According to Delphi results, introducing national social security program after passing the elderly bill was found as the most economically and politically feasible option. Similarly, public-private partnerships with NGOs was ranked to be the most economically feasible by most of the respondents. Therefore, both alternatives were considered as the most viable options to safeguard the elderly’s rights and immediate needs of healthcare, transport, employment, housing and power in terms of legality, financial needs and emotive needs. However, the options such as cutting costs from the youth, cutting costs from the military, and increasing taxes were ranked as highly unfeasible in political, economic and social sense. Whereas, the alternatives such as improvement of the existing schemes and raising awareness to support own elderly via media were ranked as moderately feasible and thus, were not given preference over the top ranked alternatives.

Senior citizens living on streets should be brought in old homes so they can be physically safe from harassment, extreme weather and violence. Additionally, they should be provided with necessities like food, shelter, water and toilets etc. Furthermore, government should ensure the maintenance and well-being of every existing old home, whether it is private or public. The government must send officials to regularly check the conditions of old homes in terms of food quality, beds and water supply etc. These officials should report back to their higher officials who must ensure whether these shelters meet a specific hygiene criterion. Similarly, anonymous surveys could be conducted asking the inhabitants about their level of satisfaction about the services provided to them and how they can be further improved. Moreover, government should ensure the regular visits of psychiatrists and doctors to old age homes to confirm the mental and physical well-being of the residents. Variables to monitor the outcomes could be anonymous surveys, phone calls or interviews with the occupants asking them about whether they are healthy and/or need further assistance. Observational skills could also be used to check the effectiveness of this action plan. In addition to that, extensive awareness campaigns should be run on media and in schools about how geriatrics have been violated in the past and/or how everyone should be kind towards their elderly. Moreover, campaigns to remove prejudices against them in the employment process need to be started on an immediate basis so that they could be financially secure. However, in the long term, the government needs to come up with a comprehensive database of old people living in unsatisfied conditions to identify what areas need their immediate attention and how severely the affected need their help. Furthermore, pension system should be made more convenient for the old employees as pension could either be directly sent to their bank accounts or made available by digital money transfer mechanisms. Similarly, compensatory system should be used for all formal sector employees who earn a certain amount, but safety nets should be reserved ensuring that people who do not get pension, they should be given at least 5000-8000 rupees for their personal spending. To measure enforceability, a random check of elderly spending can be made in several areas (rural and urban) to check their equity and welfare. In addition to that, people should be encouraged to keep their parents in their homes. In this regard, if a household does not earn more than USD 5000 per annum, they should be given enough assistance by the government to ensure that they have a cumulative of USD 5000. However, if the government could not perform this function efficiently due to shortage of funds then old age homes should be built in every tehsil with a capacity according to population proportion where one old age home should not have more than 60 to 80 individuals to avoid overcrowding. To monitor the effectiveness of this action plan, a pilot should be run in a very sparsely populated city. Subsequently, after making appropriate number of homes, the elderly and employees should be interviewed to incorporate their views for further improvements. Similarly, old age homes should have a separate room which can be used like a community center where people of all ages can come and communicate. This will ensure that the elderly in the homes do not feel lonely and segregated from the community. Moreover, every university graduate should have a necessary graduation requirement to fulfill at least 20 to 30 community service hours. To monitor the productivity of this action plan, random interviews on happiness and wellbeing could be taken by psychologists. Additionally, the constitution should be amended to add a clause of elderly protection in terms of employment opportunities, physical and verbal abuse, sexual harassment, health insurance, housing and financial assistance. This clause will give them the right to question the government in a court of law in case they do not get their cut. Furthermore, an elderly card should be made for everyone above 60 which will give them the right to use public transport for free to counter their commuting problems. Similarly, elderly cards should be issued to a certain segment of the elderly (below or slightly above poverty line) that could be used to get free or subsidized treatment in public hospitals. Easy jobs should further be made available to the elder individuals (i.e. salesperson or cashier) as they cannot do any strenuous jobs due to their health conditions. 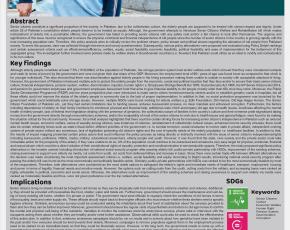