QUALITATIVE AND QUANTITATIVE IMPACT ON BRAND IMAGE AND EQUITY BY CONTROVERSIAL SOCIAL MEDIA CAMPAIGNS: An Analysis of Two Competing Brands Nike and Adidas

This study was conducted to see the impact of how people have responded in the past to the two famous advertisements released by two top-competing sports brands i.e. Nike and Adidas, that later turned out to be huge controversies and sparked a debate on social media. The aim of this study was to see how several advertisements can bring a lot of attention to a brand that was measured in this report by capturing the response on two popular social media platforms, Twitter and YouTube. The comments posted under YouTube and the tweets or retweets made on Twitter were collected by extracting data using several keywords and with the help of Application Programming Interface (API) which further required the need of a Twitter development account for Twitter specifically and a Google API account, the code for which was extracted using Python. Moreover, the impact on the financial positions of the brands following the controversies that raised both negative and positive opinions were also analyzed based on two basic metrics; their Income Statements and Market Share Prices, by extracting financials from Bloomberg Terminal. The research further went into depth by analyzing the sentiment analysis of the comments that were made in order to notice how people would be more active to comment on an issue following a controversy.

The results of the analysis showed that people will be quicker to reach the site of incidence following an uproar and show their reactions online in several ways. The impact is however magnified when several other famous figures get involved in the topic, as was done in Nike’s incident, giving it a higher recognition and response by people on social media compared to Adidas’s advertisement. People will also sometimes become more loyal to a brand following the negative allegations that are hurled upon it and so negative publicity can sometimes create positive sentiments within people, leading to a higher brand recognition and revenue stream for it such as in Nike’s case when people were buying the product to both support the brand and to ‘#BurnNike’ in protest. Similarly, it was found that the negative remarks are quicker to garner higher attention for a brand than an advertisement that is thought to create positive sentiments.

The study suggests that there is no concept of organic virality, brands pay influencers and bloggers to post about their campaigns and content is boosted to a specific target audience by spending large budget on that boosting. This can have a positive impact on the company’s overall revenue while share prices are negatively affected by controversies due to speculation and sentiments attached to the controversies which impacted shareholders who are wary of uncertainty and risk. Understanding this effect, the markets and brand managers can design their promotional campaigns and marketing strategies more efficiently in a way to generate maximum productive outcomes. 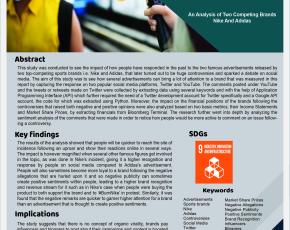