PREVALENCE OF DOMESTIC VIOLENCE AGAINST WOMEN IN PAKISTAN: Policy Analysis

Violence perpetuates in many forms around the world, but domestic violence is increasing at alarming rates, especially in Pakistan. The apprehension of domestic violence is only possible if one explores the underlying causes of such a complex process. The causal framework of this process is a condensation of cultural, social, economic, and political aspects. Most prominently, gender rules and cultural norms guide one’s actions since an individual’s behavior is based on his/her interaction with other humans and the social organization. Therefore, the present policy brief aims to review major causes and consequences responsible for the prevalence of domestic violence against women in Pakistan while considering all five levels of social organization including individual, microsystem, mesosystem, exosystem and macrosystem, in order to build up the urgency and present the importance of this issue. To serve this purpose, data was collected through interviews and survey questionnaires. Subsequently, various policy alternatives were proposed and evaluated using Policy Delphi rankings and certain assessment criteria such as importance, desirability, feasibility, efficiency, equity, and security that could be effective to exterminate the prevailing domestic violence against women in the country.

The findings of multilevel analysis illustrated that at the individual level, childhood abuse, watching marital abuse and substance abuse serve as significant factors conducive to abuse conduction by the victim; at the microsystem and mesosystem level, male control of wealth and decision making lead to conflicts; at the exosystem and macrosystem levels, exclusion of women from decision-making forced them to bear physical or verbal abuse since they were dependent economically and socially on men because of the patriarchal structure of Pakistan’s society. Similarly, gender associations and role expectations were found playing a huge role in instigating a misogynistic rhetoric. In Pakistan, girls were found to be perceived as social, economic, and religious liabilities on their families. Moreover, certain social issues, including tribal/caste system in Pakistan, experiencing domestic violence as a child, patriarchal society where men tend to dominate all walks of life, misinterpretation of religion by many scholars and people, lack of education for women, gender norms and associated roles, family structures, and poor policy and implementation structure were found to be the root causes and determinants of all other factors that contribute to the prevalence of  domestic violence against women in Pakistan. Further analysis identified certain negative consequences of domestic abuse including domestic violence’s continuation through generations, physical deformities such as acid burns or even death in some cases, mental trauma and depression, social unrest and disorganization, disintegration of a harmonious family life, and shifts in personality traits and marginalization of a community. In addition to that, certain policy actors were also highlighted that could influence the policy process as being directly or indirectly involved with the cases of domestic violence in Pakistan including government, perpetrators, victims and their children, respective families, social community, NGOs and the United Nations. Moreover, it was found that if no action would be taken in a country where literacy rates are low and general understanding of consent is missing, the situation would only worsen. However, only government policies and the use of law could prevent this nuisance. Therefore, the study proposed significant policy alternatives in order to control the prevalence of domestic abuse in Pakistan including implementation of laws against domestic violence, bringing reform through awareness alone, state should define elementary rights of women as per religion, criminalization of all forms of domestic violence by the state and no action policy. Practically, the alternative of designing curriculums whereby sex education would be provided through which children could be informed about the concept of domestic violence was found the most efficient, yet it might be unfeasible in different settings because the religious sections and some parents might contest this option. Although, the alternative to equalize inheritance laws for men and women and to provide equal ownership of assets was also found to be highly effective, but only with proper implementation and accountability of the legal procedures. Since this policy option could help women in acquiring an equal economic standing to their male counterparts, they could speak against violence without fearing divorce and economic burdens. Similarly, spreading awareness through NGOs and social media was found to be a valuable policy alternative since it was efficient and both the state and civil society could work cohesively to bring reform through this mode. This alternative was also found to be politically feasible. However, the analysis conferred that the decision regarding policy alternatives should be based on a mix of legality and security of an individual. Therefore, the criminalization of domestic violence by the government and the creation of such laws was found to be the most desirable and feasible policy alternative in the current context. Furthermore, the policy alternative to spread awareness through the help of NGOs and the media could be the second valuable option since it also scored well on the criteria of feasibility and liberty. Ideologically, it could serve as a perfect alternative considering its effectiveness. Moreover, the education of women was found vital for transformation and to help them recognize and exercise their rights. This policy could act as a cornerstone for change and/or as a savior for the women already abused, and for women in general. However, the alternative of no action was found to be inefficient and inequitable as women would continue to be marginalized in that case. Therefore, it was proposed that state should have the responsibility to protect the rights of a socially, politically, and economically repressed section of the community.

Domestic violence is a pertinent issue that requires immediate action. Affirmatively, it is a structural issue in Pakistan and needs to be viewed holistically in order to alleviate it from the society. Firstly, the state should set goals in order to cater to this issue and these goals should comprise of what the state wants to do, what it should prevent and what should be the bottom line for developing policies. Thenceforth, all school curriculums should include basic knowledge of domestic violence, “good touch” and “bad touch”, sexual consent and should urge upon children to inform their teachers, parents or siblings about any misbehavior with them. Women should be provided equal educational opportunities. The government could pass laws regarding the necessary enrollment of all genders in schools and provide quality education to all children. This will have a ripple effect. Both girls and boys will be illuminated with the negative effects of domestic violence, the number of children being educated will increase and in the long run, domestic violence may be curbed. Although these actions can be taken in the short-run, but their effects might be evident over some period. Moreover, recreation centers and mental and medical health centers should include formally trained personnel who could cater to women who are abused. Similarly, proper counselling and immediate medication can prevent huge losses. Furthermore, the state should develop a helpline primarily for women who feel threatened or are going through domestic violence. This will reduce inefficiency by immediate reporting of such cases. However, in the long term, the state should focus on making laws regarding the criminalization and the penalties of domestic violence. Subsequently, there should be effective campaigns on media through informational advertisements, radio programs and newspapers regarding the existence and implementation of these laws. The media should present cases of domestic violence so it forms an example for the rest of the abusers while depicting the consequences of such actions. To serve this purpose, it is eminent for the state to build capacities within different institutions. For example, the police departments should be strengthened enough that they can take immediate actions in case any incident is reported. More women should be employed within the police department so other women feel safe and comfortable to report their cases. Furthermore, the judiciary should be strengthened so that legal proceedings can be smooth and easy. Since legal procedures are tedious in Pakistan, many people refrain from getting involved in them because of the process and impartiality, therefore, if all these actions are taken efficiently, women may speak against their abusers and justice might prevail. The success of this initiative will be seen in the long-term, yet it can be measured through the number of cases reported or observed annually. Moreover, the government can assign individuals to monitor the progress of policy implementation and cater to the loopholes. Similarly, a cohesive strategy is required if mass awareness is a goal. The state alone will be unable to solve the issue. Hence, non-governmental organizations such as Aurat Foundation and Kashf Foundation should work collectively and with the government to conduct awareness campaigns from door-to-door and from the urban centers to the rural areas. Here again, the state can help these NGOs by initiating public-service messages across the media regarding the advancement of NGOs for this cause and to promote the reporting of any such incidents if one experiences themselves or witnesses an incident in their surroundings. In addition to that, the state can help set up committees in different rural and urban centers that comprise of one government personnel, an NGO member, and 2 to 3 members of that area. These members would include two females and one male member so that they can act as mediators between the NGOs and the ordinary people. In case women do not feel comfortable talking to people from the NGOs, they could report to these members. However, the success of this policy initiative is dependent on information transparency as all reported cases should be uploaded on an online forum, keeping the victim’s name anonymous and this information should be accessible even by ordinary citizens. One way to measure the success of these policies is to conduct direct feedback from the masses. This could be through door-to-door campaigns or necessary fulfillment of surveys before people log-in to their social media accounts. Feedback from the committee members is another way to see if these policies have led to an increase in the number of reported cases. If so, it would imply that women are now comfortable sharing their cases at least. 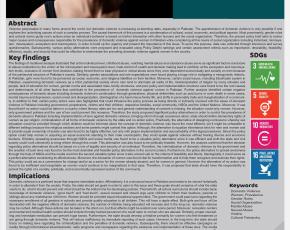