According to the Section 38(d) of Constitution of Pakistan, the state is responsible for providing the necessities of life including healthcare relief. Specialized Healthcare & Medical Education Department has been entrusted with the responsibility for the wellbeing and health of complete population. The current government in Punjab introduced the Medical Teaching Institutions Act 2019 (MTI) under its health reforms. Pakistan Tehreek-e-Insaf (PTI) government faced a lot of barriers while implementing this policy in Khyber Pakhtunkhwa (KPK) during its last regime and the same backlash could be seen when a similar policy was promulgated in Punjab, making it crucial to identify the cause. Therefore, this study aims to investigate the perspective of various stakeholders regarding the formulation and future implementation of Medical Teaching Institutions Act 2019 in the context of the public health sector in Punjab. To serve this purpose, extensive research was conducted in which secondary data was collected through news and rigorous literature review. Primary data for this study was collected from two tertiary care hospitals,  Lahore General Hospital and Services Hospital, after observing the conditions during and after the end of doctor’s strike, conducting in-depth qualitative interviews and carrying out a survey to get full insights about the pressing issues and concerns of key stakeholders.

The findings revealed that since the inception of MTI Act 2019, the stakeholders have opted for all possible ways to deny it, and to prevent its implementation in the future because they consider it  to be a form of privatization which would result in expensive healthcare services, downsizing of staff, terminations, outsourcing of paramedical services, extended work hours, salary reductions as well as a threat to job security and pension. It is mainly because the changes proposed under the new act did not take the consent of the stakeholders that the policy failed to address their fundamental needs. During the policy formulation stage, public administrators made the decision in isolation and eliminated the need to involve recipients in the process. Doctors repeatedly complained that the Health Ministry did not conduct meetings with them, and that they were uninformed about the ground realities. From survey results, a majority of the public was found to be aware of MTI act’s terms and, considering that it as a form of privatization,  a majority was against the implementation of this policy in the health care sector of Pakistan as for them, if MTI is set in place, basic health care facilities will go out of range of an ordinary citizen. Hence, it was concluded that the current social, economic, political and cultural circumstances do not support the implementation of MTI act.

This research suggests that the policy makers should have opted for advocacy strategies, to achieve coalition among the key stakeholders. Given the policy nature, it should have been planned from a long-term orientation perspective, with active involvement from actors. The weak foundation laid by policy formulation has set forth hurdles for effective policy implementation. Therefore, before formulating a policy, policy makers should take all the stakeholders in confidence in the future. Similarly, there is a need to address other pressing key issues while developing policies, such as provision of medicine in basic health units, upgradation of machinery and services in tertiary care hospitals, and necessity to reduce the patient to bed ratio. There is also an urgent need for Doctors’ Security Bill ensuring protection, safety and fair treatment at the workplace. Inclusively, the policy should have created a framework for making consistent and fair decisions and should work to protect the interest of various stakeholders. 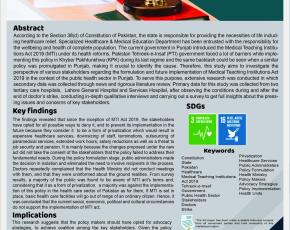