Global plastic production and consumption have increased continuously over the past years. The majority of plastic either ends up or is dumped in oceans due to which the oceans are becoming inhospitable for marine life. Since this non-biodegradable plastic pollution knows no borders, the ever-increasing waste has now become a major concern for mankind. The Pacific Garbage bag, containing 1.8 trillion pieces of plastic, in now three times the size of France. Similarly, the rapidly increasing plastic pollution in Pakistan is posing a great threat to our environment. Therefore, this report aims to critically review the problem stream, the policy stream and the political stream regarding plastic pollution in Pakistan. Furthermore, this policy analysis will evaluate a set of effective policy alternatives using the Policy Delphi rankings based on certain assessment criteria such as cost, efficiency, desirability, political feasibility, and effectiveness, in order to explore the best practices and solutions available to tackle this problem.

Plastic pollution was found to be adversely affecting the marine life and ecosystem in Pakistan. The analysis identified certain leading causes of environmental degradation in Pakistan, including poor solid waste management as the waste is dumped either outside or within municipal boundaries without treatment into low lying areas, irresponsible behavior of industries towards polluting the rivers, streams and Arabian sea through their untreated waste, no strict regulation, plastic being a cheap product is used widely in shopping bags and packaging and lack of economical and/or durable alternatives as customers are not motivated to buy expensive reusable bags instead of cheap plastic bags. Similarly, from the interview results, the sales personnel and employers were not found to be concerned about the plastic bag issue with a few exceptions who reported that they introduced new bio-degradable plastic bags, yet people preferred to bring a bag (usually made of plastic) to carry their belongings for cost saving. Furthermore, the results introduced certain policy actors that could influence the policy process including citizens, students, small businesses, shopkeepers, media, NGOs, United Nations, plastic bag manufacturers, large industries, and the government. However, it was noted that the matter would get worse if nothing was done. Therefore, the study proposed significant policy alternatives in the broader context, including imposition of fine, proper solid waste management, investment in biodegradable polymers such as poly lactic acids, and the need for more awareness in order to reduce plastic pollution in Pakistan. However, there were trade-offs between different alternatives, therefore, the decision was made on what society would value more, and what would be administratively feasible for the government. According to the Policy Delphi results, the best alternative was found to have an improved/proper solid waste management system whereas the least good alternative would be either a complete ban on plastic or investment in biodegradable polymers.

The study suggests that the problem, policy and political stream regarding plastic pollution is still under-developed in Pakistan. This issue is still competing for social and political attention, and for that to happen, it must be raised high enough on the policy agenda. Especially the lower and lower-middle class are entirely unaware about the extent of this growing situation. Therefore, extensive efforts are required to bring attention towards this issue. NGOs and other voluntary groups should arrange campaigns in schools and colleges. Similarly, the government needs to run advertisements on national TV and radio to spread the message. Furthermore, the study depicts that governance over waste management is hardly present in Pakistan. Although the Lahore Waste Management Company (LWMC) is taking new initiatives in order to improve the productivity of the system, there is a need for involvement of people and private service providers through NGOs to take part in actions and decisions. The capacity of the collection bin should be such that it could hold 20% more than expected waste generation, however, these are all short-term initiatives. Whereas in the long term, Pakistani government either needs to impose a strict fine or a complete ban on the production, use and distribution of plastic with no relaxation. Similarly, heavy fines should be imposed on industries to regulate their behavior as avoiding the penalty could be an incentive for businesses to stop using plastic. In addition to that, biodegradable polymers can serve as a practical alternative to solving plastic waste disposal problems. Moreover, poly lactic acids can be used for pharmaceutical application and personal hygiene products in textile industry and packaging etc. 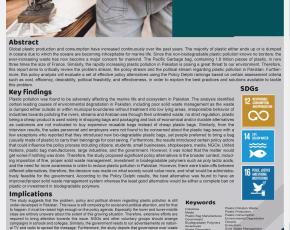