The Negative Case for Development: De-Development

Western scholarship has spent most of its significant efforts on development primarily through an economic lens. Understanding development as a highly predictable and linear process, traditional literature viewed development as a series of stages. It was argued that the preconditions, as witnessed in Europe, could yield the same desirable results as they did in Europe if implemented across the globe. Therefore, Africa and Asia had to undergo the same social, political and cultural changes that Europe went through in order to catch up. In this context, the present study aims to understand the complex concept of development and de-development by theoretically analyzing the interconnected reserve relationship that exists between these two notions and their resulting effects on human sustenance and wellbeing.

Industrialization, urbanization, secularization, democracy, and global interconnectedness were found as substantial factors behind the transformative development of human society and the economy. The findings of this study illustrated that traditionally, development was defined in economic terms with an emphasis on rapid growth in output and mass industrialization. Afterwards, the three main elements including poverty, inequality, and employment were also added, making the concept more comprehensive, and countries were categorized as under-developing in the context of sharp fluctuations, mounting debt crises, and new IMF programs controlling public spending. However, with the passage of time, this definition was further broadened to encompass education, health, poverty, gender equality, labor rights and environmental care etc. Finally, development was categorized to be a person’s ability to make decisions as a product of bargaining power differentials between groups and individuals. This view further clarified the elements of free trade and free markets. However, it was observed that taking one step forward towards development ultimately resulted in three large leaps backward in the context of continuous environmental degradation, international wars, and economic sanctions. Similarly, de-development in terms of climatic disasters, massive bushfires, droughts, melting icecaps, flash floods, forced displacement of communities due to dam constructions and increased dust levels in cities due to mass urban construction was witnessed as debilitating consequence of development. These examples highlighted how Pakistan is plagued with de-development. Furthermore, the study identified three major ways to understand de-development as a cost-benefit analysis of development with the balance tilting towards the costs, in terms of a complete renovation of the human lifestyles, and/or in terms of changes in consumption patterns of the rich.

The study suggests that for maximizing human wellbeing it requires reversing the basic conceptions of development thus leading to de-development. Mankind should engineer public policy towards the past. There must be an emphasis on going back rather than forward. Instead of an obsession with economic production, profit-maximization, industrialization, and urbanization, there is a need for revamping lifestyles to increase human well-being. Therefore, rather than placing the blame on the poor and urging them to catch up, the rich should be convinced to decrease their consumption in order to come at the levels of self-sufficient and self-contained units. Similarly, richer countries need to bring their ecological footprints significantly down to avoid the negative effects of development. 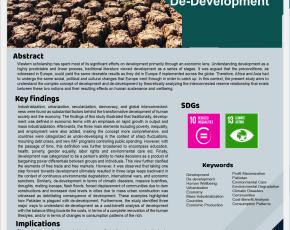