MARITAL RAPE IN PAKISTAN: A Framework for Analysis and Prevention

While there has been substantial amount of discourse on identification and prosecution of rape in Pakistan, one aspect that has still received relatively little attention is marital rape. Research shows that intimate partner sexual violence is perceived as being less severe and less damaging, both physically and emotionally, than stranger rape. While 119 countries have passed legislation pertaining to domestic violence and 125 have laws on sexual harassment, only 52 countries have laws on marital rape. The discourse regarding spousal violence, in the context of Pakistan, is particularly complex owing to the non-recognition of marital rape as a legitimate issue and the societal norms of silencing any debate surrounding sexual education. Recently, a woman from Multan filed a case against her husband for unwanted sexual advances. This case is extremely rare, or even historic, since before September 2018, there was not a single case of marital rape filed or prosecuted in Pakistan. Therefore, this report aims to deconstruct the causes, effects and policy consequences of intimate partner sexual violence in order to propose a set of effective policy alternatives using the Policy Delphi rankings based on certain assessment criteria such as effectiveness, efficiency, political feasibility and social acceptability within the context of Pakistan.

The findings showed that marital rape had a higher frequency of recurrence than stranger rape, bringing into question the wife’s ability to trust her spouse. Most women victims of marital rape reported to have remained silent. Women with lower education about sex and consent were found more likely to accept sexual violence within a marriage. The analysis identified certain individual level effects of marital rape including entrapment, health consequences in terms of reproductive, gynecological and phycological problems, social consequences in terms of economic isolation, lack of participation in regular activities, inability to work, loss of wages and limited ability to care for themselves and their children, familial consequences in terms of impacting the familial structure, especially the psychological well-being of children, and other kinds of violence since the most violent men were found most likely to rape their wives. According to ecological model, certain factors were found consistently correlated with the likelihood of women to experience marital rape. At the individual level, these factors could include low level of education, acceptance of violence, repressed sexual perversion of spouse, spouse’s desire to assert superiority over the wife, witnessing or experiencing other forms of violence as a child, correlation with alcohol abuse, and victim’s inability to escape the marriage. At the relationship level, these could involve relationships of  victims and perpetrators with their peers, intimate partners and other family members shaping their own behaviors and experiences, At the community level, it could involve how a community reacts to cases of marital rape, whereas at the societal level, the bigger, macro-level factors such as religious and cultural tolerance of marital abuse, gender inequality, economic and social policies, legislative and judicial activism, difficulty of proof argument, infringement of familial privacy, lack of awareness and documentation, and weak legal sanctions for victims could serve as the ultimate causes. Furthermore, the results depicted certain policy actors that could influence the policy process, including politicians, judiciary, bureaucrats, religious groups, non-governmental organizations, police and medico-legal officers, media, researchers and/or academia, and international organizations. However, the Protection of Women (Criminal Laws Amendment) Act, 2006, repealed the previous ordinance and defined rape in Section 299 and 375 of the Pakistan Penal Code (PPC), but the punishment is awarded only if the victim dies as a result and if the law is interpreted to be applicable. The current policy was proved to be inequitable, since it could not sufficiently protect the victims, legally or socially. Therefore, the study proposed significant policy alternatives in the broader context, including marital rape awareness campaigns, public-private partnerships to provide comprehensive, immediate and long-term care to victims, sensitivity training for police and medico legal staff, inclusion of women in the policy making process, and public condemnation of marital rape by religious authorities. However, for any alternative to work, it was found extremely important that the stigma surrounding marital rape should be reduced and that could be best achieved through awareness programs which ranked the highest, since they were seen to be the most effective in changing perception and encouraging victims to seek help. Although the political feasibility was low, if enough support could be mobilized through society and/or religious scholars, then politicians would also become bound to support this issue. Since government mandated programs were ranked fourth, having very low score for political feasibility, therefore, it would be easier to convince politicians to spend on awareness programs as the cost of this alternative was not too high, whereas the social support was high. However, in the case of assistance centers or rape hotlines, the cost was considerably higher and politicians might be wary of allocating funds, even if they could benefit from societal support.

This study suggests that in order to encourage victims to report cases of marital rape and destigmatize it, the Ministry of Human Rights, in collaboration with the National Commission on Status of Women (NCSW) and religious groups, should initiate a nation-wide awareness campaign and hold interactive sessions with relevant stakeholders to educate them about the illegality of marital rape, the legal pathways to pursuing a case of marital rape and the concept of sexual consent. Similarly, health experts and social workers should go to communities and hold interactive seminars with stakeholders and clearly lay out the psychological and physical harm caused by marital rape and the legal remedies available to victims. Furthermore, brochures and pamphlets can be distributed, and TV advertisements can be funded to effectively communicate the message. This policy recommendation must work in conjunction with lobbying for public condemnation of marital rape by religious scholars to increase the social acceptability. The religious bodies could ideally corroborate the message being given out in campaigns with evidence from religious doctrine to make the message stronger and more effective. In addition to that, government should conduct bi-annual surveys to assess public perception about marital rape in areas where seminars have been carried out to see whether any considerable change in communal norms has happened or the reporting rate has increased. Moreover, the first respondents should be trained to use a “victim-centered” and “trauma-informed” approach when talking to the survivors. It should be mandatory for first respondents to tell the victims about the law regarding marital rape and the routes they can take to pursue the case legally after conducting the MLE reports. Similarly, in the short-term, the government needs to make the journey of recovery easier by providing legal and medical assistance to victims through legal-aid programs, assistance centers, and marital rape-crisis centers that can provide immediate medical aid to victims. Such centers can also have therapists and psychologists that can provide trauma-related therapy. However, in the long-term, by incorporating more women into the policy making and judicial process, the legal and medical procedures can be made more sensitive to female issues and more likely to bring marital rape into the limelight of political and judicial discussion. 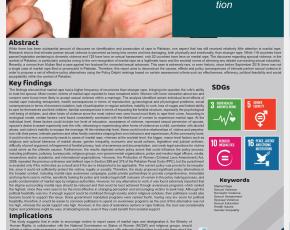