Children are the backbone of any society. When they are handcuffed and treated worse than animals, the psychological effects can be devastating. The problems that the young “criminals” endure in prisons could range from hygiene issues to sexual and physical abuse. Similarly, apart from reinforcing the delinquent behavior, Pakistani prisons are a torture cell for children as they are exposed to harassment by police officers, overcrowding, malnutrition, poor sanitation, physical, mental and sexual abuse, along with a lack of regard for their basic human needs such as medical care, education and recreation. Furthermore, the treatment of these juveniles in the prisons is not to make them realize their mistake but to punish them. There are very few opportunities for them inside the prison and outside it. This issue is of high importance because if the delinquent behavior is not reprimanded, then the crime rate would increase, and the resulting mental health problems would be severe. Therefore, this policy brief aims to critically review the problem stream, policy stream and political stream regarding juvenile justice in Pakistan. To serve this purpose, data was collected through interviews and survey questionnaires. Subsequently, various policy alternatives were proposed and evaluated using Policy Delphi rankings and certain assessment criteria such as effectiveness, economic feasibility, social feasibility, political feasibility and ease of implementation that could be effective in improving the conditions of the juveniles in prisons while making them a productive part of society.

The JJSO 2000 and Juvenile Justice Act of 2018 were found to be important steps towards children’s rights in Pakistan. Although both acts were near to perfect on paper, due to lack of implementation, the positive effects of these laws could not be seen. Further analysis highlighted significant causes responsible for the abysmal and unfit prison conditions for juvenile offenders including ignorance of JJSO 2000 since the law was not only ignored by the police officers but in 2004, the Lahore high court also repealed the law abolishing the execution of children. Lack of accountability of police officers was another cause as in many of the cases, the children were innocent and the police either based their arrest on false allegations or the police faked the date of arrest. As a result, most children were kept in jails for as long as five months before appearing in court. Immature age of juvenile offenders since minimum age for arrest is 7-12 years in case of juveniles and shared cells with adult prisoners as the capacity of the Pakistani jails is far less than the number of prisoners due to which the juveniles were kept with adult criminals, or sometimes in death cells are some more causes. Lack of funds due to which no separate juvenile facilities or institutes were created in the country despite of the juvenile justice system ordinance of 2000, poor financial condition of juvenile prisoners since the children that were mostly accused of petty thefts, running kites or using drugs usually belonged to the low-income groups so no adequate steps were taken to insure fair treatment and safeguard of their rights, lack of awareness about rights due to which these children were easy targets for the police officers are additional causes. Moreover, the study conferred significant negative consequences of the delinquent behavior faced by juvenile offenders in prisons including psychological problems, financial issues as their families had to take loans to pay heavy fines, sexual and physical violence since according to the interviews carried out by the Justice Project Pakistan (JPP), 79% of the juveniles were subjected to severe beating, 7% suspension, 36% witnessed other people being tortured, 3% solitary confinement, 2% sexual violence amounting to penetration and 16% without penetration, transformation of immature juvenile offenders into hardened criminals after surviving the severe torture and abusive environment in prisons, and social stigmatization attached to being raped or sexually abused, which in turn, might restrict victims from speaking about such violations. Besides this, the results of impact mapping presented certain policy actors that could influence the policy process as being directly or indirectly involved with the issue of juvenile justice in Pakistan including government, judiciary, police, NGOs (i.e. Justice Project Pakistan or JPP) and the media. However, if no action was taken regarding the dreadful conditions in which a significant number of Pakistan’s youth is living, the plight of these juvenile offenders would only increase resulting in more criminal activities. Therefore, the study proposed significant policy alternatives in the broader context such as reforming the police system, implementation of previous juvenile laws (i.e. JJSO 2000 and Juvenile justice Act of 2018), reintegration policy, increasing awareness, and no action policy. Since there were certain trade-offs between different alternatives, the decision was made considering the most important assessment criteria i.e. economic feasibility, political feasibility and ease of implementation. According to the ranking of the criterion using the Delphi results, no action policy and increasing awareness were found as the most feasible solutions. This was only because our society valued economically feasible solutions over sustainable ones. However, ideally, the most viable solution that could bring about a positive and long-lasting change would be the reintegration policy. Although it could be a costly option, it would fulfill the principle goal of introducing an effective policy which would be better than a low-cost policy.

Spreading awareness is a short-term solution to the problem and can be considered as the first step to a series of measures that should be taken to prevent the problems faced by juvenile criminals. Awareness can be spread through collaboration of NGOs and the “all-powerful” media. Since this problem needs to be addressed to the masses, there would be two types of information. For the educated and upper classes, the information would focus on the atrocities faced by the juveniles in these prisons, enough to invoke their sense of activism. The second kind would be for the poor class who is mainly affected by this problem. This information could focus on the rights and laws that are in place for their child’s safety. The second step would be to introduce the most feasible policy after a clear assessment of risks, costs and benefits. The long-term policy which would be most effective in improving the conditions is the reintegration policy. Before the introduction of this policy, it is necessary that the population is made comfortable with the idea of these juveniles to be a part of society again. It is important that in the time during which awareness is being spread, enough funds are allocated and a committee is formed. Since this policy requires NGOs to help teach the juveniles vocational trades, the government would have to encourage more NGOs to work for this cause by providing better incentives. Since a clause of this policy would be that only extreme offenders would be locked up and the rest would have to attend reformatory schools with a probation officer, the committee should introduce a system of volunteers because the number of probation officers in Pakistan is low. After successfully completing the probation period, the volunteers could be given monetary compensation as well as honorary certificates. The ones who perform well could be offered permanent jobs. Moreover, there is a need to reform the police system for which the government should involve a special committee of people from all the provinces to address the problem of provincial disparity. The primary job of this committee would be to introduce a system of accountability in the police officers. Similarly, the trainings for the officers dealing with juveniles would be different as they must be taught how to act in a more humane way especially with juvenile offenders. This system of accountability should also include digitized reports and incentivization to ensure transparency. In addition to that, the current conditions of the prisons can be improved by proper implementation of previous juvenile laws (i.e. JJSO 2000 and Juvenile Justice Act of 2018). Since the new act like JJSO 2000 covers most of the problems that the young offenders face at the time of arrest and after it, the complete implementation of these laws can be the most feasible option. An effective way to implement these laws is that the government makes committees for all the provinces which would include members from the police, NGOs and others who would work in collaboration to ensure the smooth working of these laws. Other than that, there should be a system of remuneration to incentivize the relevant people by providing additional resources etc. Furthermore, there is a need for an efficient monitoring and evaluation to ensure that the goals are achieved in a set amount of time. In this case, the indicators of progress could be the number of trainings being held for the probation officers and others, number of activities being conducted for the juveniles, attendance of juveniles in reformatory schools, number of juveniles who used the skills taught to make a living for themselves, and number of juveniles who were brought back into the system and after how much time. However, the second step could involve data collection for these indicators. The data can be collected using logs, referrals, focus groups and in-depth interviews. After determining how the data will be collected, the next step could be to set a time frame for this data collection (i.e. data could be collected after six months and/or annually), but all of this should be digitized. Moreover, it is necessary to appoint officers who would be responsible for the data collection against each indicator. This team could be a mix of researchers, NGO staff, police staff and/or program staff. Subsequently, it would be necessary to calculate what percentage of the target has been achieved and/or to check the discrepancies, if any arise. Similarly, all the key stakeholders would be responsible to review the data and propose ways to further improve performance and efficiency. 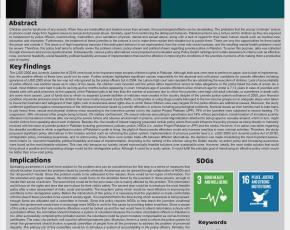