The transgender, also known as ‘hijra’, is an institutionalized third gender role that includes how people’s gender identities can be different from the sex they were assigned at birth. Transgender communities are found all around the world. In Pakistan, transgender is the group of people who receive the least amount of respect and rights, and social prejudices are very strong against them. They are not considered a part of society and are deprived of basic human rights. Among all these problems, one of the major concerns is the illiteracy of transgender community due to which sex work and begging have remained the only occupational choices for them. Despite education being a fundamental human right, there is no concept of providing education to the third gender people in Pakistan. Moreover, the circumstances are going severe because no serious steps have been taken by the government so far to enroll this community into the educational institutions or to develop a sense of security among those who are trying to adjust themselves into regular schools. Therefore, this policy brief aims to focus on the education of transgenders since education can act as an agent of change for this marginalized community. To serve this purpose, the study involved a critical review of the problem stream, policy stream and political stream regarding the illiteracy of transgenders and its consequences on their socioeconomic conditions in Pakistan. Subsequently, various policy alternatives were proposed and evaluated using Policy Delphi rankings and certain assessment criteria such as security, equity, efficiency, political feasibility and implementation that could be effective to combat the issue of illiteracy in Pakistani transgender community.

Most of the transgenders in Pakistan were found uneducated either due to gender discrimination, sexual and verbal harassment, beating by teachers and/or lack of finance. As a result, they joined a transgender community from where they participated in begging, dancing and prostitution. However, according to survey results, 64% of transgenders agreed on the fact that education could play a vital role in their lives. However, 6% were of the view that it would be unimportant. Further analysis identified major causes leading to the illiteracy of transgenders in Pakistan including poverty and strong social prejudices as either the families of transgenders do not have enough resources to provide them education or are not very concerned about educating them because of their socially unacceptable gender, harassment since majority of the transgender students face verbal or physical harassment and assault in schools due to the lack of regulatory mechanisms in institutions to provide support to such children, deficiency of good organizational jobs for transgenders due to the prevailing social biases, lack of incentive for government to take corrective actions since transgenders are considered as deviants in Pakistan so there is no proper system where they can go to get their announced rights, and lack of organized demand for education as most of them live in extreme poverty where sometimes they even do not have access to the basic necessities of life, thus in such circumstances, education becomes the least priority for them. In addition to that, certain policy actors were highlighted that could influence the policy process as being directly or indirectly involved with the issue of illiteracy of transgenders including government, bureaucracy, NGOs, men, media and transgender community. However, the resolution of issue required government to intervene and make policies as no action policy would only lead to increased cases of begging and prostitution, more criminal activities and drug addiction, decrease in Human Development Index (HDI) and low standard of living for the transgender communities. Therefore, the study proposed significant policy alternatives, to bring educational reforms for the transgender communities in Pakistan such as building separate schools for the transgender community, vocational training institutes for them, separate quota in workplaces and educating the public about gender diversity. Since there were certain trade-offs between different alternatives, the decision was made considering the most important assessment criteria of security, political feasibility and implementation. According to the Delphi survey, 50% of the transgender community perceived that it is not necessary to make separate school for them as it will again create a border line between them and the society. Moreover, almost half (48%) of the participants reported that their education can increase existing as well as new job opportunities for them, whereas, the rest believed that it is subjected to government interventions as well as on the attitude of people. Conclusively, in the short-term, providing vocational training to the transgender community was ranked as the best policy alternative and was also found implementable. However, in the long-term, there would be a need to educate the general public about gender diversity. By doing this, the strong social prejudices towards the transgender community could be removed and transgenders would be able to have access to education and other rights and would be able to live equally as other citizens. Although building separate schools could be the ideal solution for solving the problem of illiteracy of transgender community, this solution was found infeasible administratively or politically in the current context because it required the transgender community to organize themselves and come forward to demand their rights first.

The study suggests that transgenders are one of the marginalized sections of the society. The solution of their problems would thus require concerted efforts and adoption of an inclusive approach in all spheres of life. For this, non-profit organizations, the state and the transgender community itself must work in collaboration to get them out of this plight. Similarly, the government should build separate schools for the transgender community to provide primary as well as higher education since building separate schools will not only provide them with personal security and they will not feel vulnerable to sexual abuse or violence but it will also encourage them to attend schools. Furthermore, the problem of illiteracy of transgender community requires the building of vocational training institutes in the country starting with major cities like Lahore, Karachi and Islamabad. These vocational training institutes will provide them with skills to earn their living by decent means and would refrain them from getting involved in acts of prostitution and begging. Moreover, in the short-term, implementation of strict anti-harassment and anti-bullying policies in schools and workplaces can somehow ensure the security of transgender students and would encourage them to come to school without fear of being harassed or physically abused. However, in the long-term, educating people about gender diversity is the only feasible and sustainable solution. In addition to that, there is a need for the transgender community to build better relationships among them based on solidarity and co-operation as having a united voice would enable the community to better advocate for its rights. Media can also play an important role in this respect. Currently, there is an understandably huge dissatisfaction of transgender community around the role of media in depicting lives and figures of these communities in a way that strengthens the already existing stereotypes and negative perceptions. Therefore, serious efforts are needed to involve media in advocacy and promotion of rights of these communities. Furthermore, legislative authorities could help these transgenders to find jobs in government departments such as social welfare, revenue collection, local market rate check list and in polio vaccination teams. Similarly, government can provide economic security to this marginalized sector by reserving separate job quota in workplaces for the third gender community. This will also act as an incentive for them to get educated when they know that their output is being valued. 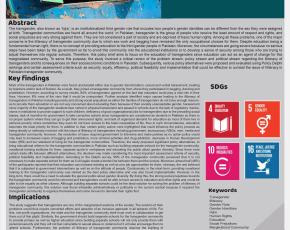