HOW DOES MISINFORMATION SPREAD THROUGH ONLINE SOCIAL NETWORKS?

According to role congruity theory, society has attributed the role of women with stronger communal characteristics than men. Due to these perceived expectations, women are more likely to fulfill the role of social influencers because generally the audience gets attracted to the beauty of women while overlooking the nonconformity of gender role and/or influencer role. Although, women can lead the way in being social influencers, the expectation of society from social influencers varies from industry to industry. In this context, this study aims to explore how misinformation (fake news) spreads through online social networks. For this purpose, a secondary research was conducted using heuristic systematic model and analyzing social media platforms in order to discover the relationship between role congruity and social influencers.

In the clothing industry, women were considered acceptable as fashion influencers since women generally dress well and have the latest sense of fashion. On the contrary, in the automobile industry, men generally perceive women to lack knowledge, appropriate technical skills and passion about automobiles. Therefore, women were found to be less likely to influence the automobile purchase decisions of men. However, in the travel industry, although the role of travel influencers does not conform with the perception of women's gender role in society, women were still found to be viewed as influential figures with a lot of followers and were seen in the pictures and videos of other male travel influencers, perhaps due to their beauty and attractiveness. Furthermore, the findings identified that bot, people, micro targeting, and trolls are the major mediums for propagating fake news in the form of manipulated ads, news articles, and many other items on social media networks with humans as the biggest cause of this dispersal. In addition to that, bots were found to be propagating fake news either by creating fake accounts or by replying on real social media accounts using the fabricated information.  However, the bots were not smart enough to determine which comments to repost and this is an instance where people were found responsible for re-sharing such fake news and spreading it widely. Similarly, trolls were found to be spreading fake news through social networks either by disagreeing with people, posting something controversial or using fake stories as a way of starting controversy or disagreement. While social media platforms were found to curb the spread of fake news, a new rival entered the arena in the form of deep fakes. These deep fakes based on machine learning were found relatively harder to filter out due to the flexibility with which they could be changed.

This study can help the advertising firms to better understand the behavior prediction models for deciding about the right ads to show for getting a specific positive response. A lot of firms can use these models to sell products like shoes, clothes, food items, etc. by narrowing down the preferences and purchase patterns of their potential customers. Furthermore, the study suggests that companies should develop more machine learning models in order to detect deep fakes which have the potential to manipulate the perception of truth. 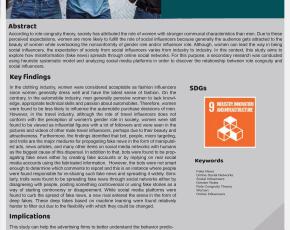