Squatter settlements or “Katchi Abadis” are developed without legal claims to the land and/or permission from the relevant authorities. Due to the inherent non-legal status of such residential areas, the squatters either have inadequate or no infrastructure facilities including water supply, sanitation, electricity, roads, schools, and health centers which in turn causes its inhabitants to live in subhuman conditions. The squatter settlements have been in existence since the time cities have been in existence, but they are more prevalent in developing countries like Pakistan. The square settlers are predominantly migrants - either rural-urban or urban-urban. It is noteworthy that since the creation of “Katchi Abadis” does not merit legal recognition, the government’s policy towards them is not well-defined. Although both slums and “Katchi Abadis” are representations of the disadvantaged communities in the society, this paper specifically aims to focus on the problems associated with “Katchi Abadis” and not slums. Therefore, this policy brief will critically review the government’s policy towards the creation and demolition of squatter settlements in urban areas of Pakistan. To serve this purpose, data was collected through interviews and survey questionnaires. Subsequently, various policy alternatives were proposed and evaluated using Policy Delphi rankings and certain assessment criteria such as effectiveness, cost efficiency, welfare, and security, political acceptability, social acceptability and administrative feasibility that could be effective in improving the living conditions of the disadvantaged communities such as square settlers as well as in combating the problems associated with the creation and eventual demolition of these informal settlements in Pakistan.

The findings of the analysis highlighted certain major causes responsible for the creation of square settlements including lack of low-income housing schemes for the low-income groups, limited land supply to provide affordable housing to the unprivileged classes due to unfair claims on land across Pakistan by powerful groups (i.e. the army officials), failed urban housing mechanism due to mismanagement of the governmental resources and corruption, and increasing rate of urbanization since limited employment opportunities and the government’s inability to ensure the provision of housing for the increased population have left people with no choice but to live in informal settlements. Furthermore, the study conferred certain negative consequences of rapidly growing “Katchi Abadis” including economic, political and social exclusion of the square settlers, more people living in subhuman conditions making an abode of epidemics like malaria, dengue, diarrhea and cancer, constant threat of demolition, increasing criminal activities, and subsequent demolition leading to further displacement. Although it was found that the Pakistani government has created the Katchi Abadi Authority for each province in order to improve the living conditions of square settlers and grant them with possession rights of the land etc., yet these authorities failed to resolve this issue. However, force field analysis highlighted that there could be certain driving forces for the provision of low-incoming housing to katchi abadi residents in Pakistan such as concern for citizens living in subhuman conditions, concern to prevent criminal activities, concern to conceal government’s efficient urban planning and/or concern to preserve the beauty of cities, whereas, there could also be certain refraining forces such as corruption and mismanagement of governmental resources, more profitable usage of government-owned land, and claims on the majority of land by few powerful groups. According to the policy actor matrix, development authorities (i.e. Capital Development Authority (CDA) and Lahore Development Authority (LDA) etc.) and katchi abadi authorities, being substantial policy actors due to their direct involvement in the development of cities, would have high interest and a high degree of power to influence the policy formulation and reforms, social welfare organizations would have high interest but a medium degree of influence over the policy process, district government would have medium interest but a high degree of power, media would have medium interest and a medium degree of interest, whereas low-income groups or katchi abadi residents would have high interest but a limited degree of influence over the policy making process. Moreover, the pervasiveness of the “Katchi Abadis” in Pakistan demanded that the government must take actionable steps towards countering this problem since inaction would result in the creation of more “Katchi Abadis” and eventually nothing would remain of the cities except for widespread presence of slums and “Katchi Abadis”. Therefore the study proposed significant policy alternatives to improve the living conditions of the disadvantaged communities, including provision of affordable housing by not following the traditional standards of construction and infrastructure, recovering occupied land from the land mafia, investment in rural livelihood and infrastructure facilities to prevent urbanization, legitimizing the squatters, and inaction. Since there were certain trade-offs between different alternatives, the decision was made considering the most important assessment criteria i.e. political acceptability, administrative feasibility, cost efficiency and effectiveness. According to Policy Delphi results, 65% of the respondents identified government investment in replicating urban facilities in rural areas as the most suitable alternative, whereas 75% believed that the policy option of inaction would be the most ineffective and least feasible option. However, according to the alternative ranking results, the ideal solution would be to improve the provision of affordable housing. This policy alternative ranked low on the political acceptability scale which was the most important assessment criterion since the primary concern of the elected officials was the substantial government investment that would be required for this solution. In such a case, the support of elected officials might be gained by proposing an incremental development scheme. By doing so, affordable housing with basic facilities could be provided to the low-income groups without any substantial governmental investment. Moreover, it would be easier to gain political acceptance for such an initiative, and it could prevent the creation of “Katchi Abadis”.

The study suggests that the number of “Katchi Abadis” in urban centers is growing at an unprecedented rate which warrants actionable steps to be taken by the government in the form of both short-term and long-term solutions. In the short-term, the government could legitimize the squatters and improve basic infrastructure facilities such as water supply and sanitation. Although, it will not solve the policy problem, it will mitigate the negative implications of the problem faced by square settlers, for example, living under the constant threat of demolition. Moreover, it will improve the welfare of the residents of “Katchi Abadis” by providing them with psychological security of ownership, improving the quality of life and the basic infrastructure facilities. However, the government cannot rely on this temporary solution alone and must take sustainable steps to alter the current conditions of square settlers in the long run. Therefore, the government should ensure the provision of affordable housing by allocating separate funds for it in the budget. These housing schemes could deviate from the traditional standards of construction and exclude some non-basic facilities in order to provide the housing at affordable rates. Similarly, the government needs to take a major clean-up action to throw land-grabbers from the land and make government land available to the public. By recovering the land from the illegal encroachers, including criminals, corrupt politicians and government officials that are involved in seizing land illegally and underhandedly, the government can use it to further the welfare of the people by providing low-income housing options. Furthermore, the government should invest in rural livelihood and infrastructure to prevent urbanization due to rural-to-urban migration. The facilities that attract people towards urban centers should be replicated in rural areas. This policy plan will not only lower the number of “Katchi Abadis” but will also improve the quality of life in rural areas. In this way, the government will also be able to make a more efficient use of its limited resources by solving multiple problems simultaneously. However, if the government could select only one policy plan, then it should focus on ensuring the provision of affordable housing since “Katchi Abadis” majorly exist because people in the urban centers do not have access to low-income housing options and that problem is further aggravated by urbanization. 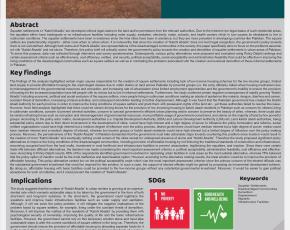