FISHERIES AND THE DEPLETION OF MARINE RESOURCES: Policy Analysis

Fisheries in Pakistan are becoming unsustainable since the marine life within the ocean is depleting rapidly with the passage of time due to poor policy structure and implementation. At this rate, the industry and environment will die down if not handled profusely. Therefore, this report aims to critically review the problem stream, policy stream and political stream regarding the depletion of marine resources in Pakistan, followed by exploring the root causes that contribute towards the issue of unsustainable fisheries. To serve this purpose, a survey was conducted with a group of students in two rounds to understand the current trending viewpoints and opinions related to fisheries. In the end, this policy analysis evaluated a set of effective policy alternatives using the Policy Delphi rankings and certain assessment criteria such as feasibility, efficiency, liberty, security and equality, in order to propose the best practices and solutions to combat the problem of depleting marine resources and fisheries in Pakistan.

The findings highlighted that fisheries contribute 0.4% to the GDP and 1.3% to the agricultural sector in Pakistan. Moreover, two major subsectors in fisheries were found including in-land sector that focuses on fish farming within the country and marine sector catch that revolves around the sea. Further analysis presented that in-land sector annually produces 0.8 tons of fish per fisherman, whereas, marine sector annually produces 2.59 tons of fish per fisherman. Similarly, interview results demonstrated that the fish farming sector and industry is progressing for good in Pakistan. Furthermore, it was found that even Pakistan has a lot of marine and freshwater resources but it does not have parks for recreational fishing. However, according to the survey results, none of the respondents proclaimed to possess an excellent level of knowledge regarding fisheries, however, 21.7% proclaimed to possess satisfactory knowledge on marine resources in Pakistan, whereas, around 82% people were found unaware of the EEZ (Exclusive Economic Zone). In addition to that, majority of the respondents (78.3%) considered water pollution to be the most important problem related to fisheries while only 4.3% considered social problems as the major cause of concern. The rest of the responses were distributed equally between depletion of marine life and low economic contribution in the second round of survey; however, depletion of fisheries was leading with 17.2% in round 1 with low economic contribution at 6.9%. Furthermore, when asked about the importance of the economic perspective of fisheries, deviation between the rounds was very little. 14/23 (Round 1 = 15/29) people rated the economic perspective of fisheries as important. However, when asked about whether the economic contribution made by the fisheries sector could be gathered from elsewhere, 73.9% answered in denial in the second round, which was quite an increase from 62.1% in the first round. In contrast, when asked about the importance of the environmental perspective of fisheries, the results showed significant deviation between the first and second round. Although no one considered the environmental perspective unimportant, a high number of fluctuations were seen among the options of somewhat important (Round 1=22/29 Round 2=2/23) and very important (Round 1=1/29 Round 2=13/23). However, the social perspective mode was found to be little important and/or somewhat important (as both options received 8/23 responses in round 2), whereas, the skill perspective mode was found to be somewhat important with 9/23 votes and the ethical perspective mode was found to be important with 8/23 votes. The analysis further identified significant causes responsible for the depletion of fisheries including poor management of marine resources since the fishing industry in Pakistan has a complex ecosystem which makes it difficult to impose control and regulate the market, weak licensing system as large sized mechanical launch fishing is still unregulated and under no check from the Ministry of Fisheries which results in illegal fishing in territorial marine waters, technological advances in fishing methods as modern fishing nets, made of nylon and a fine knit pattern are harming the ecosystem by catching trash fish and fish babies, poverty resource degradation nexus as the exploitative informal credit systems make poor fishermen indebted and forced them to use destructive fishing methods, depletion of mangrove trees since the roots of mangroves are breeding ground for fish, and the increasing water pollution in Pakistan that ultimately contributes to marine pollution. In addition to that, certain policy actors were also highlighted that could influence the policy process as being directly or indirectly involved with marine resources or Pakistani fishing industry including federal government, provincial government, consumers, FDC (Fisheries Development Commissioner), Ministry of Food, agriculture livestock, foreign fisheries such as Asia-Pacific Fishery Commission, fishermen, and  moles (middlemen who work as loan shark and manipulate fishermen for personal gains). However, it was found that continuation of current situation would result in disastrous consequences economically, environmentally and socially since a large part of the Pakistani economy is dependent on the fishing industry, thus, no action plan would eventually result in lost exports, reduced human consumption of fish, and less primary and secondary employments in fisheries sector. Therefore, the study proposed significant policy alternatives in the broader context including better management, stricter policy reformation and implementation, promotion of fish farming and aquaculture, introduction of individual quota system and no action policy. According to the Delphi results, most of the participants voted that no action plan must not be opted for in any case. This showed that majority wanted a change in the management and policy structure of the fisheries sector. However, strict policy reformation was ranked as a ‘very important’ alternative. The second most approved choice was strict policy implementation. An almost equal number of people opted for fish farming and individual quota system. Nonetheless, the top two chosen alternatives were found infeasible either economically or politically which showed that currently, the common man does not fully understand the situation of the fisheries sector. In addition to that, very few people were in opposition of the quota system which showed how the common person accepts to undergo a few losses in return for a better ecosystem and fairer management. However, according to the alternative ranking results, none of the proposed alternatives possessed the factor of equality. Although the alternatives were found ethically ‘accepted’, this might conflict with the economically motivated capitalist. Conclusively, it was found that no alternative could be fully implemented without some sort of compromise in their list of actions. Therefore, some parts of all alternatives should be taken and implemented in the context of the current situation while the rest should be done on an incremental basis

The study suggests that a complex ecosystem, along with a complex market makes it mandatory for the authorities to better manage the industry. It is imperative that the authorities concerned with agriculture, pollution on land, and development are taken into confidence by the fisheries department to work towards a common goal of protecting the ecosystem, including the marine ecosystem. It is also very necessary to shed light on the issue of overlapping jurisdiction of federal and provincial governments in policy making and to make the positions of authoritative bodies clear. This would not only help in making better policies but would also make it easy for the enforcing authorities to implement those laws and policies to ensure sustainability of the fishing industry. Moreover, the government should shift focus to the in-land sector and incentivize private investors and large-scale marine fishers to increase the scale of in-land farming. The government should also allocate export interest to in-land fishing so that large-scale marine fishers would shift to in-land projects. Furthermore, by imposing huge taxes on large scale marine vessels and reducing level of taxation on in-land farming, the government could get more private sector investments. Additionally, this will increase the number of fish caught if large scale in-land fish farming is practiced as improving in-land farming will reduce the burden on the marine sector. Subsequently, the number of fish exported would also increase and this revenue could be used to invest back into the sector. Furthermore, individual quota system should be introduced to preserve the ecosystem, make it more sustainable and to increase accountability of fish caught.  Reducing the catch from marine sector by introducing the quota system would also reduce the burden on institutions as it would reduce illegal fishing and increase regulation. Moreover, government should incentivize the in-land fishing for the common fisherman by opting to implement strict policy reformations and implementation with imposition of heavy fines to illegal fishing and unsustainable fishing methods so that fishermen who opt for marine fishing would shift to in-land fishing. However, this is a long-term action plan as currently it is unclear who holds the authority of the fishing sector (whether the federal government or the provincial government). Besides this, all alternative action plans which are politically unfeasible should be executed on an incremental basis in the long-run until the foremost problem of authority is resolved. Such a system could also be measured by evaluating the outcomes generated from the alternative policies. Individual quota system could account for an increase or decrease in marine fishing. Simultaneously, the same indicators that currently measure in-land fishing statistics could be used to measure the growth of fish produced. Moreover, the number of exports could be helpful in measuring the quality of fish and funds created through in-land fishing. Conclusively, all these systems could be used to measure the growth of in-land fishing. 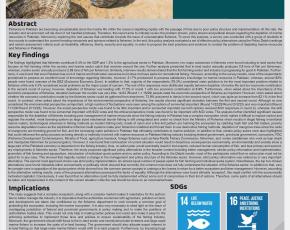