The findings highlighted certain reasons that directed Pakistan’s banking sector towards consolidation including failure to meet the capital adequacy ratio and/or minimum capital requirement set by SBP. In other cases, banks that were struggling with liquidity problems or had poor financial health were also taken over by larger banks. Furthermore, it was found that consolidation has reduced the number of banks in Pakistan, prominently, the number of foreign banks has had a sharp decline that could be due to increased competition from local banks; shift of wealth management and premier banking business to Dubai; deteriorating macroeconomic conditions of the country; and/or unfavorable changes in the global strategies of foreign banks. Moreover, after measuring the level of competition in industry across four metrics, the results showed that the level of concentration in the industry spiked in 2010 and came back down in 2011, then it remained stable until 2018. However, analyzing the banks’ performance before and after mergers, it was found that profitability and operating efficiency declined after mergers for all the banks considered in the study except for Meezan Bank Limited. Although at the individual level, consolidation offered the opportunity to mitigate a broad range of risks such as earnings risk and operational risk, but at the aggregate level, it might cause an increase in systemic risk that could be a threat to the entire financial system. Therefore, the number of merger and acquisition transactions over the past decade has reduced considerably. Although, the SBP took steps to make the industry environment more conducive for consolidation, yet it could not increase the number of consolidations. Furthermore, the analysis showed that in general, mergers and acquisitions did not improve the financial performance of banks. Thus, due to the slow rate of M&A transactions, banks might be finding consolidation to be more of a burden rather than a fruitful venture that could enhance profitability and operating efficiency.

The study suggests that diversification into new markets and product offerings can allow banks to reduce earnings risk. Similarly, economies of scale can also follow through with consolidation. However, to fully benefit from economies of scale, it is crucial that the internal cultures of the merging companies are also merged together harmoniously. Presently, many mergers and acquisitions look at the two banks on paper only andthus, fail to consider the culture and people fit of the merging banks. As a result, risk of merger failure increases. Therefore, it is important for the financial experts to ensure proper communication and that the employees are adaptable to change for successful mergers. 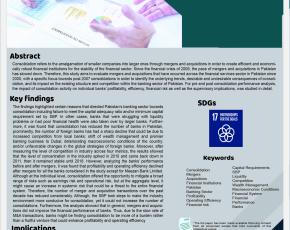