The fact that young adults are spending too much time on the internet is a significant issue. Research shows that globally, the average daily time spent online by teenagers has increased to 250 minutes which previously used to be around 90 minutes. Such a drastic increase in figures points towards the importance of this issue and a dire need to take corrective action. Therefore, this report aims to critically review the various factors at play behind the increasing usage of the internet by the youth, especially through online social media platforms. To serve this purpose, three symbols relevant to the issue at hand were considered. The first symbol was a word called ‘internet addiction disorder’. The normative leap of ’internet addiction disorder’ was a prescription for harsh medicine calling the relevant policy actors to deal swiftly and effectively with growing internet consumption by the youth. The second symbol was an event related to the death of a 23-year old male who was found dead at a Taiwanese internet cafe following a non-stop three-day online gaming session. This symbol acted as a synecdoche. Since it is so emotionally compelling, the normative leaps slip right past our rational brain. Finally, the third symbol was a picture portraying excessive internet usage as extremely addicting and luring. It paints a threatening state which can be useful for soliciting corrective actions.  Subsequently, this policy brief evaluated a set of effective policy alternatives using the outcome matrix and certain assessment criteria such as efficiency, equity, welfare, liberty, security, legality, political feasibility and implementation, in order to propose best practices and solutions to combat the issue of excessive and unrestrained internet usage by the youth in Pakistan.

In Pakistan, almost all the causes of excessive internet usage were found inadvertent in nature and/or the unintended consequences of guided human action. Similarly, the analysis identified certain major causes of the increasing internet usage by the youth including advent of internet infrastructure and IT policies since issuing 3G and 4G licenses to cellular companies, the low-cost import provision for Chinese mobile phones, the policy of distributing laptops among high achieving students and low data charges has led to an increased internet access among youth, culture as with the improvement in economic status and a rising middle class, society has experienced a cultural change due to which young people have turned towards social media sites to express themselves and carve out their unique identities, lack of rules/restrictions, both publicly and domestically, on excessive internet surfing, and socio-economic factors as in Pakistan, the increasing rate of literacy and school enrollment, the ease of keyboard use in the local language and the economic expansion of middle class has vastly contributed to the growing impact of internet usage. Currently, 22% of Pakistanis were found having the ability to surf the web. Furthermore, the study highlighted certain possible negative impacts of excessive internet usage including interpersonal problems as excessive internet users reported to have difficulties in social engagements, thus, they prefer to stick with online friends that ultimately results in decreasing tolerance levels and a growing sense of loneliness in them, behavioral problems as excessive online presence among internet users leads to rescheduling of activities, late evening use, upsetting of sleep cycles and declining academic performance, physical problems since spending too much time on the internet reduces the likelihood of healthy diet consumption and proper physical activity that could result in certain health issues such as obesity, headaches, back pains, postural deformities, disruption of sleep patterns and/or carpal tunnel syndrome that has a direct link to higher rates of computer usage, psychological problems as higher internet usage orients people towards a belief that events in their lives are out of their control (external locus) which could result in multiple mental health issues such as internet addiction, anxiety, low mood, irritability, restlessness, depression and self-isolation, and work problems since the availability of unlimited internet in offices could significantly reduce employee productivity. According to the influence map results, religious groups being substantial policy actors would have a high priority and a high degree of influence on the policy process, parents would have a high priority but a low degree of influence, and bureaucracy would have a medium priority with a high degree of undecided influence. However, all three of these policy actors would support regulations on the internet usage. On the contrary, the policy actors including politicians having a low priority and a medium degree of influence on the policy process, ideological secularists having a high priority but a low degree of influence, and educationists/researchers having the least degree of influence on the policy process, were found opposing any policy regulations for limiting the access to internet. Furthermore, it was found that with the advent of technological improvements, the situation was likely to worsen in the absence of any supportive action since the negative impacts of excessive internet usage compound over time. Therefore, the study proposed significant policy alternatives in the broader context including awareness campaigns, imposition of ban on social media sites, more proactive approach by parents, self-regulation and technological restriction on excessive internet usage. Since, there were trade-offs between different alternatives, therefore, the decision could be made on what society would value more, and what would be administratively feasible for the government to do. According to the results of the outcome matrix, awareness campaigns scored well on political feasibility criteria for having an easy implementation. This alternative was also found administratively feasible. Although a ban on social media sites was found politically and administratively feasible as it would not require a lot of extra effort and resources, however, it could face some opposition by civil society. Whereas, when parents were asked to monitor their child’s behavior, this alternative was found politically but not administratively feasible, as one could not monitor progress on this. However, the proposal to allow individuals to regulate their own behavior was found both politically and administratively feasible. Moreover, it was found that the step to restrict internet usage after a certain amount of use would be administratively and politically feasible since it would require a minor investment in some technology, but there would be opposition by the civil society and youth. Similarly, according to the alternative ranking results, using technology to restrict internet usage after a certain amount of time and imposing ban on social media sites, both alternatives scored medium on political feasibility, showing that they could be implemented only after opposition from the civil society, youth and international community. Whereas, a ban on social media sites and allowing individuals to regulate their own behavior scored low on ideological feasibility. This was because the former option would curtail the freedom of speech, while the latter option was ineffective as it would make the sufferers responsible for the solution. However, the alternative of using technology to restrict internet usage after a certain amount of time scored medium on ideological feasibility since it would restrict the freedom of speech and internet connectivity, but after a certain amount of usage.

In order to tackle the issue of excessive internet usage by the youth, an elaborative plan needs to be formulated. The plan would be split up into two phases. The first one would be the short-term phase and it would last for five years at least, while the second one would be the long-term phase and it would last from five to fifteen years. In the short-term phase, three policy plans could be implemented including awareness campaigns, the initiative by parents to take a proactive approach in monitoring their child’s internet usage and finally, using technology to restrict internet usage after a certain amount of time. However, in the long-term, the only feasible option is to allow individuals to regulate their own behavior. The option of awareness campaigns and a more proactive approach by parents to monitor their child’s internet usage are suitable in the short-run as they allow the spread of information and a conveyance of message to youth regarding what is responsible internet usage. These policy options help to make the users more aware of the existing problems. When coupled with the option of using technology to restrict internet usage after a certain amount of time, an effective short-term solution is formulated with the help of which a more coercive mechanism along with the effective spread of information can be put in place. Whereas, the option of allowing individuals to regulate their own behavior is feasible only in the long term as by that time, the short-term policy options would result in the awareness of the issue and higher level of feasibility from the ideological perspective. The three variables that could signify if the policy plans are working include the reduction in number of hours spent online (derived through public surveys), data consumption per capita (data made available through internet providers) and finally, a reduction in the number of cases reported in hospitals for mental and psychological side effects of internet addiction. 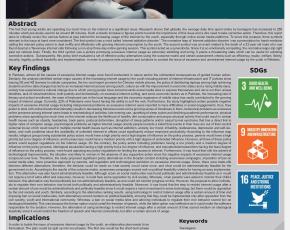