THE EFFECT OF ATTRACTIVENESS ON PERCEIVED LEADERSHIP AND INTENTION TO FOLLOW

The role congruity theory about female gender roles suggests that women face difficulties and are generally considered unfit for leadership. This prejudice exists because the leadership roles are described as agentic, whereas women are known to have more communal qualities. In this context, this study aims to examine the application of role congruity theory about gender on online influencers. For this purpose, a secondary research was conducted using heuristic systematic model and analyzing social media platforms in order to explore the effect of attractiveness on perceived leadership and intention to follow.

It was found that in case of online influencers, the role congruity theory of prejudice towards female gender roles might not be entirely applicable without necessary changes since online influencers are not limited to a geographical group or a society. They are accessible globally, thus their influence depends on more factors than those which were used to justify the theory of role congruity in the past. Some of the trends of acceptance include movements and protests in favor of female gender rights and roles. However, stereotypes are still dominant in communities. Furthermore, it was found that leadership is a diverse concept, ranging from roles of power to those of influence. Therefore, the online influencer who is more effective and relatable for his or her followers will be perceived as a favorable potential occupant of a leadership role. Similarly, one of the observed factors that can influence a person’s perception of leadership qualities and his or her intention to follow a leader is the physical attractiveness of that leader. This factor has a major effect in the entertainment field. People choose good-looking individuals as their inspirations and perceive them as examples to follow. Conclusively, the effect of attractiveness on leadership perception of a person leads to biases.

The study suggests that the problem lies on both individual and societal levels. Hence, a new approach to judging a person’s ability for leadership roles is necessary for better development of societies. On the other hand, it can also help marketers and brand managers to better understand how physical attractiveness of celebrities positively impacts the consumers’ attitude towards brands and their purchase intentions which will enable them to design more effective and appealing marketing campaigns. 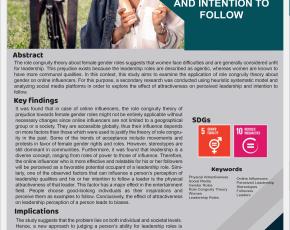