Pakistan continues to normalize domestic violence as a social norm. Common concepts like gender subordination and perception of women as male property are ingrained in our society and keep passing down from generation to generation. Domestic violence encompasses much more than what is commonly understood i.e. physical, sexual, emotional, mental, financial, and verbal abuses. Every second woman in Pakistan suffers from domestic violence and most of the cases go unreported. Imbalance of power, which is always abused by the world, coupled with society’s unjust tolerance and ignorance, creates a perfect environment for a problem like this to exist. Therefore this concept, which was initially more common in rural areas and among uneducated men, is now equally prevalent in all social classes of the country. This issue, which was never given due importance, has now become a crucial need for women to unite and stand for their rights and raise their voice against violence and ill-treatment. Although many people agree that domestic violence is a major problem, only a few felt that the government should spend time and money over this issue which portrays the neglect that this issue has always faced. Therefore, the present policy analysis aims to review the major causes and consequences of domestic violence in Pakistan to build urgency and present the importance of this issue. To serve this purpose, various policy alternatives are proposed and evaluated, using Policy Delphi survey and certain assessment criteria such as efficiency, effectiveness, liberty, security, and political, economic, administrative, technical, and social feasibility that could help to protect and promote the domestic status and rights of women in the country.

The findings depicted that a complex interplay of social as well as psychological factors combined with the society’s complete dismissal and normalization of the imbalance of power between both genders results in domestic violence. Similarly, it was found that the problem lies in male mentality which is the root cause and determinant of all other factors that contribute to domestic violence. Domestic violence could destroy family environments and children who witnessed their parents being abusive to each other were found more likely to suffer from low self-esteem and emotional distress and they could be abusive towards their intimate partners in the future. Workplace environment could also get affected as the number of lost days at work could increase whenever a female employee becomes a victim of domestic violence. However, mostly the victims of domestic violence did not seek help from external sources either due to lack of autonomy and/or induced fear. Furthermore, the analysis identified certain negative consequences of domestic abuse including physical trauma, genital trauma/injuries, mental health problems, anxiety, depression, PTSD (Post Traumatic Stress Disorder), eating disorders, suicidality, cardio-vascular hypertension, limited sexual and reproductive control, lack of health care, lack of authority, difficulties in seeking cure, low birth weights, reproductive health concerns, loss of child or premature deliveries and hormonal changes that could alter the immune system. Moreover, the results presented significant interlinked causes on why men resort to violence in Pakistan including socioeconomic framework of Pakistan which makes women dependent on their male counterparts for financial and social security, workplace issues like harassment and gender discrimination that further restrict women from leaving an abusive relationship or becoming financially independent, social issues like child marriages and forced marriages since girls, at that vulnerable age, are unaware of their rights and cannot stand up for themselves, conventional mindset of men and women, work/job stress, lack of proper divorce laws that could secure the financial protection of women, lack of social acceptance for divorce, no implementation on ban of alcohol and drugs, radicalization of Islam since religious groups in Pakistan portray Islam wrongly just to serve their own interests, social barriers against divorce, lack of social and economic freedom for women, tribal and capitalist social formations, low awareness about the social rights and roles of women, and legal discrimination in the legal system due to which women hesitate to report incidents of violence. In addition to that, certain policy actors were also highlighted that could influence the policy process by being directly or indirectly involved with domestic violence in Pakistan including non-governmental organizations, media, NGOs, religious groups, society, men, government, academics, police department, and women. However, it was found that if no action would be taken against this issue then Pakistan, which is already on the verge of moral degeneration, could suffer an adverse moral and social decline. Therefore, the study proposed significant policy alternatives in order to control domestic violence in Pakistan, including elimination of barriers such as opposition of religious groups, funding of non-governmental organizations, awareness and mindset development (advocacy and awareness raising education that teaches non-violence, human rights, and gender issues in schools), establishment of a 24-hour government help line for the victims of domestic violence, and staffing of women in police stations and complaint centers. However, there were trade-offs between different alternatives so the decision was made considering the most important assessment criteria i.e. security and political feasibility, since analyzing the Delphi responses found that in a country where so many cases of domestic violence come forward, the utmost concern should be the security of women. Although, the elimination of barriers and women staffing provided the greatest levels of security, but women staffing was found politically less feasible, therefore, elimination of barriers such as opposition of religious groups was ranked as the most effective policy action to fight against the issue of domestic abuse in Pakistan. Moreover, raising awareness was ranked to be the second and women staffing in the police stations was ranked to be the third most feasible policy plan.

Any movement towards the solution of domestic violence must take form of a completely integrated effort generated from the core of the problem which crosses all the policy actors such as government departments, health and housing departments, non-governmental organizations, police, and every agency which can play an integral part in solving the problem. Although, the Pakistani government realizes this issue, it needs to be consistent in its efforts. Similarly, creating a helpline is useless without creating proper awareness for it since individuals will not reach out for herp if they do not know about the facilities that are available to them. Therefore, integrated efforts of government and NGOs should be made considering this issue. The government should not only fund NGO campaigns but also monitor how much foreign money is entering the country through these NGOs and whether it is being handled well. Subsequently, such accountability will motivate NGOs to work fairly, actively, and effectively. Moreover, government should monitor the legal system for the proper implementation of laws. There should be incentives for women applying in the police service department. NGOs and helplines should be backed up by the legal system and the police for immediate inquiry. Similarly, the government should ensure that the legal system and the police are supporters of NGOs, helplines and their campaigns, and that media can be used as a channel to create awareness. Additionally, healthcare facilities should have trained personnel in screening all types of domestic violence and abuse cases and should be educated on the treatment and rehabilitation of victims. A committee combining religious leaders, ulemas and scholars should be formed to outline the basic rights of women and afterwards, it must be ensured that these rights are not being violated. Moreover, fatwas which violate women’s rights and bring about hate against women must be banned by the government and policy makers. Besides this, the subcontinent’s culture has always treated women as property of men. Whereas, if a woman is respected in a culture, she is less likely to be abused and beaten, thus, for the society to work in a productive way, the two genders must respect and cooperate with each other. Similarly, if all these actions are practiced religiously by the respective departments then it is possible to develop a society where women can live at will, take their own decisions and practice economic and social freedom without having any mental illnesses like PTSD and depression. 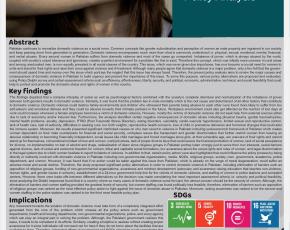