DO ABORTION LAWS IN PAKISTAN NEED ANY REFORMS?: Policy Analysis

Abortion is the issue of social justice, human freedom and woman’s health. Although global awareness about family planning has increased, yet in Pakistan, the case is different where the history of reforms, in the context of abortion laws, is not elaborative. Pakistani women face more hurdles in their domestic and professional lives if they try to pave a path that is not aligned with cultural biases. Moreover, because of the complexities in the implementation of laws, the issue is not only about lack of women’s independence but also about the absence of basic human right of health. All these factors highlight the importance of bringing reforms in the existing abortion laws as well as the proper implementation of these laws in Pakistan. Therefore, this policy brief aims to analyze the existing abortion laws in Pakistan and the major intricacies that are created due to the vagueness in these laws. Furthermore, the study focused on the omissions of certain strict constraints that has made this specific policy system inflexible and difficult to accommodate the present world concerns. To serve this purpose, data was collected through interviews and survey questionnaires. Subsequently, various policy alternatives were proposed and evaluated using Policy Delphi rankings and certain assessment criteria such as efficiency, liberty, equity, acceptability and feasibility that could be effective in reforming the abortion laws to decrease the maternal mortality rate as per demand of the modern family system in Pakistan.

The analysis highlighted significant causes of unintended pregnancies leading to abortion issues including lack of knowledge about preventive measures for pregnancy, lack of proper sex education, rape, paid sex due to financial crisis, cultural myth that wife’s body belongs to husband, lack of authority and power over men, rare usage of condoms, social expectation from women to become mothers and failure of family planning practice. Furthermore, the findings highlighted that the unclear and obscure policy about abortion in Pakistan has made it difficult to implement these policies in medical centers, giving room to medical experts to practice their own biases. Moreover, health and reproductive issues like unplanned pregnancies due to unfavorable/unwanted/forceful conception, early marriages, and sexually transmitted diseases were found putting additional burden on women’s health and making the abortion issues more complicated. However, the study also conferred certain negative effects of abortions including death of the pregnant women, infection, loss of fertility and financial problems in case of expensive abortions. Besides all this, it was found that the current abortion policy of Pakistan does not address the issue of rape since abortion is not allowed even in rape cases. According to the policy actor matrix, doctors, being substantial policy actors due to their direct involvement for implementing the procedures of abortion and providing security and confidentiality to the patient, would have high interest and a high degree of power to influence the policy formulation and reforms. Similarly, NGOs, social media and father of the child would have high interest and a high degree of power over the policy process. On the contrary, pregnant women, victim’s family and unborn child would have high interest but a low degree of power. Peers and colleagues would have low interest and a low degree of power, whereas, Islamic muftis and policy makers would have low interest but a high degree of power over the policy making process. However, interview findings emphasized that there should be specified directions and rules from government organizations for the implementation of abortion laws, otherwise it could bring up a lot of societal issues. Therefore, the study proposed significant policy alternatives in the broader context including complete legalization of abortions with discretion to the woman for taking decision related to her body, temporal legalization of abortions till the second trimester (almost twentieth week of pregnancy) without any conditions and with full independence for woman’s decision about her choice, conditional legalization of abortions in which abortion would be legalized only in certain conditions such as when the mother’s health is in danger, when the fetal health is an issue or when it is a rape case, changing the mindset of people and no action plan. Since there were certain trade-offs between different alternatives, the decision was made considering the most important assessment criteria i.e. feasibility, acceptability and efficiency. Subsequently, the policy alternative of bringing change in the mindsets of people was found to be the best suitable solution. Although it scored low on efficiency, it was found to be a feasible and socially acceptable policy option as it could lead to the desired outcomes in the long-term. However, conditional legalization and temporal legalization were found preferable to complete legalization in terms of feasibility and acceptability, but there was a compromise for the desired outcome in these alternatives. On the contrary, complete legalization could give the best outcome but the trade-off would be of feasibility, hence, it ranked at fourth position, whereas, no action plan scored maximum on feasibility, but because of lowest efficiency this alternative would not be desirable at all.

The study suggests that a shift in the dynamics of women empowerment and her freedom demands a more innovative and accommodating policy system. To achieve this, the action plan would include awareness activities like social campaigns based on the information of abortion laws, women rights etc. This can also include the seminars based on the facts and figures showing the gravity of the situation. The main purpose for these activities would be to spread awareness about the rights of women, her decision-making power, dangers that can be caused if abortion issues are ignored and religious perspectives. Moreover, the action plan could involve the incorporation of abortion related medical information in the syllabus of academic studies of adults so that they could understand the importance of health issues and make conversant decisions when needed. However, to gauge the effectiveness of these action plans, surveys could be conducted to check the level of resulting awareness as well as to monitor the change in the mindset of people, change in the responses of people towards abortion related matters or change in the rigidity of people towards such matters. Furthermore, the clarity and proper implementation of the existing abortion laws in Pakistan could solve half of the issues caused by the complexities of abortion, whereas, complimenting the existing policy that is based on Islamic laws, awareness and confidentiality policies could cater to the remaining unaddressed issues that would reduce the fraction of maternal mortality due to abortion intricacies to a large extent. Similarly, the state would have to ensure the quality administration that covers confidentiality purposes. Since matters of abortion are intricate and privacy becomes the biggest concern for females in this regard, counsellors should be arranged by the state and there should be proper infrastructure maintained by the government. Even the human resources like gynecologists and nurses could play an important role in maintaining the system for the implementation of any of the desired alternatives. Conclusively, if the policy alternative of spreading awareness about women rights and the need for change is implemented with proper management of infrastructure and human resource facilities, the desired change in social mentality could be accomplished which further needs to be monitored properly to achieve the complete legalization of abortion and the undivided discretion to women to make their own decisions in such matters. 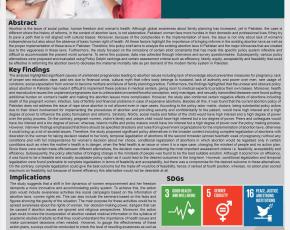