DENIAL OF INHERITANCE RIGHTS TO WOMEN IN PAKISTAN: Policy Analysis

Despite being a legally protected right, the denial of inheritance to women remains a conflicting reality that plagues the socio-economic landscape of Pakistan. Although efforts are being made worldwide to empower women socially and economically, yet Pakistani women are conditioned to acquiesce with a secondary status that stifles self-reliance, self-worth, and a sense of independence. Women in Pakistan have been systemically excluded from activities that have involved being in the public domain. Such restricted mobility, stemming from patriarchal values embedded in the social structures and customs, coupled with the inadequacy of law enforcement mechanisms, has alienated women from claiming their due share in inheritance. Given the complex nature of these cultural and structural dynamics, there is a dire need to bring legislative as well as social reforms to improve socio-economic outcomes for women. Therefore, this report aims to critically review the problem stream, policy stream and political stream regarding the denial of inheritance rights to women in Pakistan. To serve this purpose, data was collected through interviews and survey questionnaires. Subsequently, various policy alternatives were proposed and evaluated, using Policy Delphi rankings and certain assessment criteria such as equity, welfare, social acceptability, political acceptability, political feasibility and implementation that could be effective in protecting women inheritance rights and/or ensuring proper implementation of inheritance laws for women in Pakistan

Lack of efficient systems that could streamline transfer of property to women led to many atrocities committed against them. In some parts of Pakistan, especially in Sindh and Punjab, marriage of a woman with the Holy Quran was found to be a common practice to “deny women’s inheritance rights”. Although these marriages could not be attributed to one cause only and might be a result of lack of suitable proposals, crossing of the marriageable age for a girl, or to bring honor to the family, yet many Quran marriages were solely found as a consequence of the greed to maintain family property. Moreover, the tradition of levirate or “bride inheritance” in which a widow is married to her brother-in-law was found in practice to prevent fragmentation of family property in different parts of Pakistan. Similarly, cousin marriages, a customary practice in both rural and urban areas of Pakistan, were often inspired by the similar idea of retaining control over family land. All these practices were manifestations of gender relations that exist within the Pakistani society where women are treated as a mere commodity to preserve inheritance, placing no value on their right to property by virtue of being a natural heir. Furthermore, it was found that inefficiency of state machinery (or ineffectiveness due to customs) in implementation of inheritance laws fuels the disparity that already exists amongst men and women, resulting in the unjust practices and poor economic outcomes for women. The analysis further identified significant causes responsible for depriving women from their share in inheritance including customs and traditions since women have presumed to play subordinate roles so gender discrimination pervades matters of inheritance, lack of awareness and limited social mobility of women due to which men believe that women are incapable of assuming ownership and control of property, marriage practices as dowry (the tradition of giving gifts and money to daughters upon marriage) along with other expenses incurred at her wedding are considered as a substitute for woman’s share in property, and lower levels of education amongst family members, especially males. In addition to that, certain policy actors were also highlighted that could influence the policy process as being directly or indirectly involved with women’s inheritance rights and laws in Pakistan including the government and state institutions, NGOs, civil society organizations, judiciary, media, women, and men. Besides this, results conferred that if the customary practice of depriving women of inheritance would remain neglected then men would continue to use traditions as tools to subjugate women and the state of affairs would continue to worsen over time. Therefore, the study proposed significant policy alternatives including access to legal aid, awareness campaigns and work of non-governmental organizations (NGOs) in rural areas, legal reform, active role of courts, and education as a tool to bridge the gender gap. However, criteria-based assessment exposed certain trade-offs between different alternatives. Similarly, the results of Policy Delphi confirmed that many policy alternatives, although effective if executed, might lack viability in terms of implementation. Low social acceptability of awareness programs regarding inheritance rights of women would translate into lower levels of private funding available to such initiatives, thus, ranking this alternative low on equity but high on welfare. On contrary, education might prove to be an extremely powerful tool in the long-run but given the current economic and political landscape of Pakistan, it seemed like a far-fetched ideal. Although awareness programs might not produce the same levels of equity, welfare or comprehensive change as compared to improving education, yet their scope of implementation proved them more feasible policy options. Although streamlining the legal system with reforms would have long-term benefits, yet its political infeasibility did not make it a viable alternative. Similarly, an active role of the judiciary and courts in processing cases pertaining to inheritance that could improve outcomes in the long run seemed implausible due to political interventions in matters of the law. Conclusively, almost all alternatives ranking highest on welfare and equity were found ranking low on practical criteria. However, in the case of providing legal aid, not only did it score high on equity and welfare but providing access to legal aid also came up with considerable political and social support, catering to key aspects of both ideological and practical significance.

Since the ineffective implementation of inheritance law continues to stifle female empowerment, immediate action should entail establishment of legal aid centers coupled with awareness campaigns on inheritance rights as a part of government policy. Legal aid can include assistance with the completion of marriage and birth certificates to provide a legal basis for claiming inheritance afterwards as well as encouraging women to pursue inheritance disputes in courts. Similarly, women may also be encouraged to sign pre-nuptial agreements before marriage whereby all the assets owned by both partners are listed and their shares are outlined in case of separation or death. Bringing such agreements into the mainstream will “normalize” the idea of female ownership of assets and will be especially useful where they may receive some inheritance. Additionally, lawyers, especially those associated with the Bar Councils, can be encouraged to provide pro bono legal help and support on a regular basis to women who otherwise cannot afford litigation. This can be further ensured by defining a minimum threshold of pro bono hours that these lawyers are required to invest in for a district and by monitoring whether they are fulfilled. Moreover, awareness campaigns should not only be focused on the awareness of the law but also on encouraging women to get themselves registered. However, to ensure implementation, government can provide free of cost registration to encourage women, and with the collaboration of NGOs, can monitor expiry of their NICs and conduct follow-ups for renewal. Furthermore, dissemination of such information via electronic and print media, as well as through door-to-door schemes in rural areas will bring it into in the mainstream. Similarly, men should be made aware of the repercussions of denying inheritance rights to women which is now a criminal offence according to the Prevention of Anti Women Practices Act 2011 (PAWPA). However, gaining support from men is both important and difficult to facilitate such policy interventions. Therefore, engaging men with local influence, such as religious clerics in such schemes, will play a strategic role in changing male attitudes. Once the society experiences a shift in how female inheritance is perceived and realized, social acceptability will flow naturally. Subsequently, it will be possible to implement policy alternatives with more lasting outcomes such as application of Muslim Personal Law as the sole law and taking inheritance out of the purview of customary law. Moreover, with Pakistan ratifying the Convention on the Elimination of all Forms of Discrimination Against Women (CEDAW) in 1996, such a secular view of this law will pave the way for creating gender neutral laws on inheritance. However, the effective implementation of all these action plans will require constant monitoring at every step. Similarly, it will require combined efforts of the state and civil society, partnering with NGOs and encouraging private firms to invest in creating awareness on this issue, to set a precedent for mitigation of further gender inequities in our social structures. 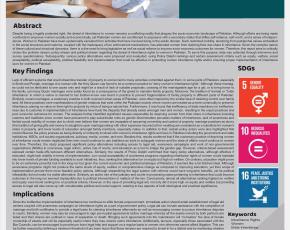