The Islamic Republic of Pakistan is home to 21 million people who have been in a constant struggle to live an ideal life. The constitution of Pakistan is significantly influenced by the Shariah Laws and the Government of India Act 1935. However, the salient features of the constitution, which are unchallengeable, make it unacceptable to incorporate any law, policy or debate which is in contradiction to the basic Islamic principles. This has been an area of conflict between different institutions and groups as their interests are dependent on the implementation of these jurisdictions which has led to many instances of harassment of couples, public defamation, lynching, and targeted killings. The problem lies in the exploitation of the law which classifies sexual activity as a crime, as people are subject to unjudicial treatment by the hands of general public and law enforcement agencies. Violence is already prevalent in the country, and the lack of proper implementation of the law promotes this anarchist activism. Pakistan has been ranked as the top country in the list of honor killings as an estimated 20% of all honor killings are observed in Pakistan. Although the issue of criminalization of premarital consensual sex is a major concern in the whole world, Pakistan fails to identify or prioritize it due to the controversies associated with it. Moreover, the need to solve this problem is not acknowledged by society. Therefore, this policy brief aims to critically review the problem stream, policy stream and political stream regarding the issue of criminalization of premarital consensual sex in Pakistan. To serve this purpose, data was collected through interviews and survey questionnaires. Subsequently, certain policy alternatives were proposed and evaluated using Policy Delphi rankings and certain assessment criteria such as welfare, security, liberty, legality, economic feasibility, political feasibility, social feasibility and ease of implementation that could be effective in resolving the issues related to consensual sex in Pakistan.

From analysis, the findings highlighted significant causes responsible for the criminalization of consensual premarital sex in Pakistan, including religious barriers since there are contradicting views and conflicts on the issue of consensual relationships, social barriers as premarital consensual sex is a taboo in Pakistani culture, and legal barriers since the Pakistani legislative system has some inherent challenges due to the socio-cultural norms and practices which make it illegal and highly criminalized to have out-of-marriage sex or even a relationship. However, the law regarding the issue of premarital consensual sex was found ineffective in terms of implementation and as a result, several cases remained off the record because they either settled by some illegal practice like bribery and violence, or by murder. Although the biological fact addressed that people in warmer areas have a younger age to hit puberty, yet the average Pakistani has to wait until marriage to have sexual intercourse and this was found to be causing frustration among adults and increasing need for premarital consensual sex. However, people were found to be recognizing it as a need but were unable to act in accordance because they lacked proper guidance on how to approach this problem. Moreover, the study conferred significant negative consequences of poor policy implementation regarding consensual sex including harassment of couples as couples go through immense stress while dealing with the societal pressure and as a result, some unfortunately commit suicide, violation of privacy and dignity rights due to inappropriate interference of law enforcement officials, additional costs on government to perform raids and surveillance activities, creation of an unregulated prostitution industry as premarital consensual sex without marriage has been in practice for a long time in the form of prostitution, relationships and hookups among adults, increasing rape cases as the sexual frustration among the adults who do not find any channel to fulfil their desires resort to forceful sex, and insecure sexual practices since insufficient sex education in people ultimately results in unhygienic sexual encounters, no use of contraceptives, unwanted pregnancies, overdose of oral contraceptives, and abortions without professional supervision. In addition to this, the results of impact mapping presented certain policy actors that could influence the policy process by being directly or indirectly involved with the issue of consensual/premarital sex in Pakistan, including religious scholars, political parties, judiciary, bureaucracy and unmarried couples. Moreover, it was found that one option to look over this issue would be to acknowledge it and take no action that changes anything in the status-quo. This action was found in line with the constitution and thus, would be the least challengeable. However, the actors against the current policy would be upset. Therefore, the study proposed certain policy alternatives in the broader context such as no action, ideal situation, Islamic way of temporary marriages, having a neutral stance, and legalization and regulation of prostitution and porn. Since there were certain trade-offs between different alternatives, the decision was made considering the most important assessment criteria i.e. social feasibility, political feasibility and economic feasibility. No action alternative was found easier to implement but was not desirable considering the current situation and the arising problems. On the contrary, a secular state was relatively desirable, but it might grant enough liberty, security, and welfare to the public which would result in the loss of a unifying narrative which currently happens to be “Islamic” Republic of Pakistan. Although having a neutral stance on the issue seemed to be relatively closer to no action, however, it had a technical difference of dissociating itself from the issue. Therefore, this option was found as relatively favorable in most of the aspects which enhanced its chances to be the optimal solution. On the other hand, Islamic ways of forming temporary relationships or legalization and regulation of prostitution and porn assumed to have a polar stance on the problem. Although these alternatives were economically feasible, their political and social backlash made it evident that these alternatives could be cumulatively feasible but not individually feasible.

Tackling the problem in the short-term would encompass on optimizing the current situation in a way that majority of the policy actors can be satisfied at the minimum cost. Thus, the most effective and relevant way to approach this problem would be staying neutral and having no stance in favor of or against the issue since the current situation makes it necessary to choose the option which results in the least conflict among the groups or elites. This will essentially allow the decisions to be decentralized and the issues would not remain a national problem and would rather be solved from their origin. Secondly, this signifies an impartial approach of the state in private matters which is essential for the removal of public-private interference of state which halts the overall development. The problem is deeply rooted in the ideologies of the society and cultural norms so making a sudden shift is extremely difficult. However, in the long-run, amendments are necessary otherwise Pakistan will continue to face challenges when it comes to the issues related to sexuality or intimacy which conflict with the basic cultural ideologies. Since the inception of Pakistan, the dynamics of the culture have changed significantly which shows that the public is willing to accept gradual changes. Therefore, including sexual education as part of the curriculum might be a step in the future to counter the taboo related to sexuality. However, the best course of action for the long-term must be amending the constitution gradually in order to incorporate a more adaptable approach where everyone is free to exercise all the basic rights endowed upon them without any insecurity or risk. Moreover, the effectiveness of these actions can be monitored through qualitative and quantitative measures using different variables. Since the issue at hand is largely a social issue, addressing the root causes of the problem and the rate of harassment, and increasing awareness could ensure representative reporting of instances. Furthermore, public complaints against individuals or institutions who exploit their power under the umbrella of legislation must be monitored to ensure proper implementation of policies. Similarly, the data on honor killings or forced arranged marriages (if found guilty of fornication) must be closely monitored and the analytics must be used to provide key insights on the matter. 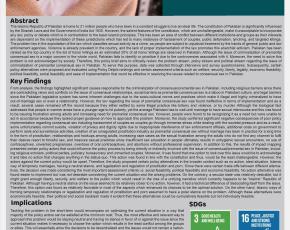