The condition of Pakistan hockey, which is officially the National Sport, can be visualized by the failure of Pakistan team in qualifying for the Hockey World Cup 2014. It has been 24 years since Pakistan has won the Hockey World Cup. Probably, the reason that hockey is still there is just because it is the national sport of Pakistan, otherwise it has already faded away with Pakistani team at 14th spot in the world ranking. The defamatory condition of the national sport in the country depicts the carelessness of the nation towards sports. This has emerged as a significant problem since sports like hockey, squash, snooker, etc. have nearly vanished from the frame. Moreover, reduction in local and international level tournaments has reduced the revenue generating opportunities for the government and hockey federations through tickets and broadcasting. However, Pakistan hockey, being the national sport, has the potential to assist in economy and social construction of the nation if managed properly and therefore, it needs the due attention of the government as well as people. In this context, this report aims to deconstruct the root causes that have led to the failure of Pakistan hockey in order to propose a set of effective policy alternatives, using the Policy Delphi rankings based on certain assessment criteria such as efficiency, equity, welfare, liberty, security, political feasibility and implementation that could help in the revival of Pakistan hockey.

The analysis identified significant causes for the ineffectiveness of Pakistan hockey such as: mismanagement by the government since hockey was neglected in the government budgets in the past, security concerns due to which no team visited Pakistan for an international series or tournament since 2008, lack of accountability as the allocated funds were never spent on the development of hockey, mismanagement at Pakistan Hockey Federation (PHF) as PHF failed to effectively manage the sport by implementing plans in the right direction, lack of adaptability with new rules and technologies since Pakistan failed to adopt the rules and work with new technologies that were coming in the game, poor domestic and academy structure in the country as PHF could not launch any league that could give international exposure and monetary packages to the players, lack of qualified management, coaches and staff due to which conditions in grounds were inappropriate for training and playing, lack of basic facilities in terms of tournaments and grounds at the local level, low salary packages to players due to which the youngsters were drawn away from the game, declining role of educational institutes since after the separation of Sports Board from Education Board, hockey lost its popularity among students and youngsters, and the role of corporate sector as hockey always struggled to get the sponsors. Similarly, the results introduced certain policy actors that could influence the policy process including government, Ministry of Finance, Ministry of Provincial Coordination, Pakistan Sports Board, Provincial Sports Boards, Pakistan Hockey Federation, Pakistan Olympic Association, regional associations, media, corporate sector, Pakistan Education Board, retired hockey players and former Olympians. Moreover, it was found that if things continued in the same way, there would be no chance that the Pakistan hockey team could win major tournaments in the future since no one would be willing to play hockey or make a career as a hockey player. Therefore, the study proposed significant policy alternatives for the revival of Pakistan hockey in the broader context including improvement of domestic system, introduction of Pakistan Hockey League and other series, sound and qualified marketing team for PHF, broadcasting through national TV, cohesion of Education Board and Sports Board, funding by the government, provision of sound packages to players for their career development, and availability of foreign and qualified coaches at domestic level. Since there were trade-offs between different alternatives, the decision was made on what society would value more, and what would be administratively feasible for the government. However, for the development of hockey, it was found important to realize that revamping the domestic system is essential, but it would be a long-term process. Whereas according to the Delphi Survey, the introduction of Pakistan Hockey League would be the best current alternative to aid the national level players.

The study suggests that the revival of hockey is important to revive the sports culture in Pakistan since an improvement in the national game will also help the development of overall sports structure in the long run. Therefore, it is imperative that polices must be designed to take this sport out of its current situation. There should be the development of sports facilities at the local level which may include providing AstroTurf grounds to all the regions, providing facilities at the local level, making the regional teams by regional associations, provision of qualified coaches and trainers and arranging tournaments at the local, district, and provincial government levels. Furthermore, a hockey league should be introduced so that the PHL members could negotiate with hockey boards in other countries to convince the players to come to Pakistan. Similarly, PHL should also involve government officials so that the government and PHL work hand in hand to provide security in the country to international players. The next step could be to attract investment in the league. Similarly, sound marketing teams can serve as a short-term initiative to increase the awareness of the game among audience and to bring in new sponsors. Moreover, instead of hiring new individuals, there must be a marketing competition arranged among the PHF employees and the top performers should be selected for the team. This could also help avoid hiring costs. However, another method that could lead to a good marketing team is to train the employees through the marketing courses from institutions or training programs by experts. Besides this, new experts could also be hired to serve the purpose. Furthermore, all the domestic tournaments should be live telecasted at national television, Facebook and YouTube accounts of Pakistan Hockey Federation. This will increase the viewership which in turn will encourage the federations and associations to arrange better tournaments. Moreover, there should be one department comprising of at least six members with equal representation from both Sports and Education boards and they must be given the role of making a sports policy that should create a perfect balance between sports and educational activities. Similarly, one sports board team from every region should be set to penalize the sports activities arranged by the students. This will keep young blood involved in the sport. In addition to that, the government should allocate more sports budget to hockey and the specified quota for hockey should be set for the next 10 years. It is viable because there is an immediate need for AstroTurf grounds in the country. Furthermore, the salary packages can be improved by providing players with jobs in different sectors or by increasing the match fees. Moreover, there should be medical insurance to ensure the quick recovery of injured players. This could be a long-term plan to motivate others to participate in hockey. In addition to that, job offerings must be provided for the foreign coaches and there should be an increase in funding since foreign coaches demand more pays. Similarly, after the selection of coaches by PHF, they must be given a reasonable tenure by signing contracts, in order to analyze the effectiveness of the alternative, since it requires time. 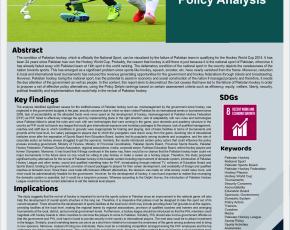