Hockey, having the most decorated history in the sportsbook of Pakistan, is nowhere close its former glory. This issue has been knocking on the door of attention for the last two decades, despite hockey being the national sport of Pakistan. This sport is dying, and the decline of hockey seems to be almost complete now. Apart from a few victories on the Asian level, the Pakistani hockey team has not been able to win any international hockey trophy in the 21st century. Despite that, there is still no serious consideration towards the improvement of the game and its decline is largely ignored. Therefore, this report is focused on the decline of hockey in Pakistan, which is followed by exploring the root causes that constitute towards this decline. The issue is then highlighted by various policy analysis tools. In the end, various policy alternatives are proposed and evaluated, using certain assessment criteria such as efficiency, security, equity, welfare, economic feasibility, political feasibility and implementation, that can help to improve the condition of hockey in the country.

Hockey was found to no longer be a game of choice for youth and concerned parents in Pakistan. School and college level hockey was found to be diminishing from the country. Players were found prioritizing global hockey league rather than playing for the national team. According to survey results, 57% of the students did not know the fact that Pakistan failed to qualify for the Hockey World Cup in 2014. Furthermore, the analysis identified major causes for the decline of Pakistan hockey, including the behavior of the government towards the national sport as most of the sports budget is allocated to cricket while hockey has remained the ignored sport without even having a rented home. Furthermore, lack of media attention as hardly any channel in Pakistan discusses the issues related to hockey due to domination of cricket and football viewership in the country, changes in the requirements of the game since Pakistan has not been able to compete with the fast pace of changing rules, financial status of hockey players as their salaries are quite low, and the incompetency and unprofessionalism of PHF as frequent changes in management and coaching staff along with job insecurity usually results in inconsistent policies. However, force field analysis highlighted that there could be certain driving forces for the revival of hockey in Pakistan such as repossession of national pride, restoration of public interest in hockey, and resolution of financial issues of hockey players. On the other hand, there could also be certain refraining forces including cost of revival, lack of planning and issues between the government and Pakistan Hockey Federation (PHF). Moreover, the influence map results presented certain policy actors that could influence the policy process including media and journalists as being supporters, government and PHF as being contenders, former Olympians, current hockey players, coaches and managers of Pakistan hockey team as being dependents, and citizens and club level hockey players as being deviants. Furthermore, it was found that if things continued in the same direction, there would be no chance that the Pakistani hockey team could win major tournaments in the future since players would keep moving to different leagues to get financial stability and in turn, hockey would not be sustained as the national sport of Pakistan. Therefore, the study proposed significant policy alternatives for the revival of Pakistan hockey in the broader context including introduction of Pakistan Hockey League (PHL), change in the infrastructure acquisition of PHF, focus on rural areas, and provision of financial incentives to schools, colleges and clubs to maintain a quality hockey team. The analysis of policy alternatives showed that Pareto efficiency (economic state where resources are allocated in the most efficient manner) could be achieved either through the introduction of PHL or by focusing on rural areas since both efficiency and equity were high in case of these two alternatives. The alternative of changing the infrastructure and acquisition of PHF could not produce the same degree of results for equity and efficiency. Moreover, looking from the societal perspective, it was observed that changing the infrastructure could be a better option because of welfare and security, but in case of acquisition, there was still uncertainty on whether the new management would be capable enough to take appropriate measures. However, ranking the alternatives according to the assessment criteria found focusing on rural areas to be the best policy alternative, followed by the introduction of PHL. Acquisition of PHF was found to be the least preferred alternative.

The study suggests that a hockey league, just like the Pakistan Super League (PSL) in cricket, can serve as a platform to revive the lost status of hockey since it will not only bring in sponsors but will also bring out new talent within the country. Therefore, PHF needs to find sponsors willing to invest in their Hockey League. New sponsors will bring financial incentives to PHF and hockey players which will provide players with financial, economic and psychic security, and as a result, they will not have to look for foreign leagues anymore. Furthermore, just like PSL is bringing some stars to cricket, PHL can flourish domestic and club level players so that Pakistan can get more talent. Moreover, by playing with foreign players, national players will learn the skills of relying on short passes. In addition to this, PHL will automatically get coverage from Pakistan media, which in turn will result in people taking interest in the sport. However, considering the security conditions in Pakistan, PHF needs to get a rented venue so that international players agree to play in PHL. Moreover, acquisition of PHF by some major sports player in Pakistan will result in less influence of the government. Besides this, another important action plan can be to develop the infrastructure of hockey from the root level which can be done by focusing on rural areas, changing the body and personnel of PHF, and bringing in new faces. Although proper infrastructure will give a boost to hockey by producing quality players at the domestic level, which will ultimately result in strong competition on the national level, this can only be done if schools and clubs are producing talent consistently. However, in Pakistan, the majority of schools and clubs are not willing to invest in hockey because of low turnover of the team in recent decades, thus providing them with financial incentives and giving them aid to maintain a quality hockey team will be fruitful for the sport in the long term. 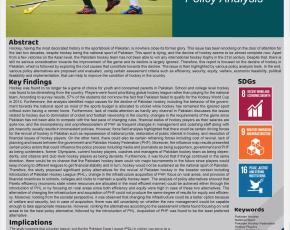