The Pakistani print industry reflects language diversity and is a platform for debate and discussions as well as a source of valuable information for active readers. The daily news is a perishable item with a shelf life of one day. Hence, it can be observed that the production, delivery and consumption of the daily news is very fast paced when compared to other industries and the demand for newspapers is uncertain. Although, the market of newspapers is highly concentrated, and the newspapers that are published in Urdu have a broader reach, however, over the years, there has been a drastic drop of about 50% in newspaper readership from 2016 to 2018. This was due to a variety of reasons including the shift towards electronic outlets for news, political control over the press and an overshadowing increase in television viewership and ownership in most households. With a lower demand, it is harder to fetch a high price for newspapers. In this context, it has become crucial to understand the nature of the newspaper industry in Pakistan, possible problems in the supply chain sector, the complex relationship between vendors and company, and the tradeoffs between increasing revenues and increasing circulation that can impact the company’s profitability. To serve this purpose, the underlying case study aims to discuss the newsvendor model problem faced by Daily Ummat Press, an Urdu newspaper, which is well-recognized across Pakistan for its daring news content, speedy news updates and independent investigative journalism in order to get insights about a real-life newsvendor model and to dissect the components for a single order inventory system for finding the optimal order quantity.

The case findings illustrated that the market for Daily Ummat Press was divided into three different zones depending on their distance from the head office. Each zone had a different demand structure and costs. The innermost zone (Z-1) had an average demand of 90,056 newspapers per month with a deviation of 4543 units, the second zone (Z-2) had an average demand of 58537 with a deviation of 2953 units whereas the third zone (Z-3) had 42.25% of the average demand of Z-1 with a deviation of 1919 units. From the results, it was found profitable for the company to increase circulation until zone 2, however after this point, the cost of circulation exceeded than the ad revenue gained per print by increasing circulation. Furthermore, the complaints received from vendors indicated that the current production target was not efficiently catering to the demand of the readers. As daily demand was found fluctuating and the ordering system was mostly based on the agent’s subjective assessment, the company often ended up producing more than the actual demand, leading to high costs. However, the company used to make up for its revenue loss via print media advertising space sales to large multinational companies. Moreover, it was found that with an increased circulation of the newspapers, there would be more chances of earning a higher ad revenue, but with the increasing costs of transport and deteriorating traffic conditions in the outskirts of Karachi, it was increasingly difficult for the distribution departments to sustain such a wide circulation.

This case can be taught in the inventory management module to undergraduate programs for operations management, service management, managerial accounting and supply chain management. It can be used to teach multiple supply chain concepts such as the calculation of optimum production quantity in a single order inventory system (or newsvendor models), types of contracts with suppliers including the concept of double marginalization and distribution management. Furthermore, the case can be recognized as a newsvendor model problem with high demand uncertainty since the production and consumption of newspapers are in a single day. Therefore, in order to avoid over or under production of newspapers, the optimal order quantity should be calculated using a newsvendor model that has a single order inventory system and demand variability. Similarly, this study can help students in analyzing possible strategies of handling the problem and to gather the relevant information to solve a newsvendor model problem. Moreover, supply chain managers often face a similar tradeoff between increasing circulation and ad revenue for different products. The choice is often inevitable when external conditions change such as the rise in petrol prices as shown in this case, thus, the study recommends adopting a systematic mechanism with a robust supply chain for determining the size of a production run. 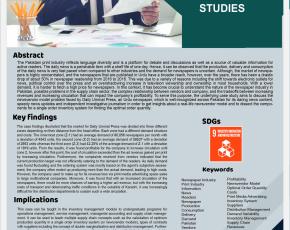