THE CRISIS AND MANAGEMENT OF PLASTIC POLLUTION: Policy Analysis

The rapid pace of globalization, growing markets, industrialization and exponentially growing population calls for a convenient lifestyle. One of the many things that aids to this convenience is plastic because of its wide variety of usage. However, being surrounded by plastic products in everyday life is leading to a global crisis of plastic pollution as plastic is gradually becoming an environmental threat, and if this issue is left unchecked, it can seriously harm the marine life, cause environmental degradation, and upset the whole ecosystem. Plastic has also proven to be dangerous to human health. Over usage of plastic products has led to an ecological crisis that is now getting out of control worldwide. Even in Pakistan, the rapidly increasing plastic pollution is posing a great threat to the atmosphere. Therefore, this report aims to critically review the problem stream, policy stream and political stream regarding the crisis and management of plastic pollution in Pakistan. Subsequently, this policy brief will evaluate a set of effective policy alternatives, using the Policy Delphi rankings and certain assessment criteria such as efficiency, equity, security, legality, acceptability and politically feasibility in order to explore best practices and solutions to combat the issue of increasing plastic pollution in Pakistan.

Management of plastic pollution was found to be a major challenge in Pakistan since the country neither had a uniform system for waste collection nor waste disposal. Further analysis identified certain leading causes of environmental pollution in Pakistan including poor implementation of policies as the use of plastic bags is a prevalent culture in Pakistan and no one has ever been penalized for using non-biodegradable plastic, despite of the fact that Pakistan has relevant policies regarding the use and ban of plastic, inefficient recycling since the concept of proper recycling is  not a common practice in Pakistan and instead, waste is either dumped in the outskirts of the cities, simply burned, or ends up in the seas, wide usage of plastic in product packaging since it is inexpensive and saves time, and lack of awareness as Pakistan has a very high illiteracy rate so many people are still unaware that plastic is a non-biodegradable material. Similarly, the study conferred certain negative impacts of increasing plastic pollution including extinction of aquatic animals, disruption of ecosystem, growing health hazards to humans and wildlife. In addition to that, influence map results introduced certain policy actors that could influence the policy process by being directly or indirectly involved in the consumption and management of plastic pollution in Pakistan including the government, NGOs, innovators, individuals, social influencers and motivational figures. The crisis of plastic pollution might not seem important right now but if no action is taken, it would have devastating effects in the long run, threating all life on the planet. Therefore, the study proposed significant policy alternatives in the broader context to control the issues of plastic pollution in Pakistan such as switching from plastic bags to paper bags, creating awareness in the whole country, and making recycling a top priority. NGOs should focus on creating awareness and the government should also have an immediate and strict ban on plastic. However, there were trade-offs between different alternatives so the decision was made on what society would value more, and what would be administratively feasible for the government to do.  According to the Policy Delphi results, the alternative of creating awareness was ranked highest by the public since it was more politically and administratively feasible, but the success of this policy plan was found dependent on how the general public reacts to these campaigns. Although the alternative of making the recycling system more efficient could ideally eradicate the crisis of plastic pollution, practically, this policy was found hard to implement since it would require massive political, administrative and public support which could be difficult to gather since people would not be willing to accept that a huge budget of the country be spent on setting up recycling plants. On the contrary, the alternative of incentivizing companies and industries to take initiative could be desirable for the public, but the companies and industries directly influenced by this policy would consider it as highly undesirable. Moreover, political feasibility could be at question because some highly influential politicians and bureaucrats could hinder the implementation of this policy for the sake of personal gains. However, going environment-friendly was found highly appreciated by the public and numerous companies had already gone plastic free or environment-friendly to make a good reputation. Therefore, this policy was found highly socially feasible and desirable in this context.

The study suggests that the crisis of plastic pollution can only be managed if all the policy alternatives coexist with each other so that all sides of the issue can be addressed properly. The state could begin by short term plans which would include creating awareness. This would require spreading awareness through the media. For example, the media was able to unite the country on the issue of water crisis in just a matter of days. Similarly, the urgency of this issue could be communicated to people if this issue is framed and portrayed properly on media and through all other campaigns. It would then result in less resistance from industries and companies to go environment-friendly. Furthermore, once such large-scale awareness has been created, it would be easy to implement long-term goals. Since people would be aware of the issue, they would be more likely to accept the policies made in favor of plastic pollution management. Subsequently, implementation of these costly yet crucial alternatives would not receive such wide scale resistance. Similarly, individuals and small businesses can take initiatives to become environment-friendly. Sapphire is a company that not only uses paper bags, but also introduced seed bags that contain seeds which grow into plants once the bag decomposes. Although it could be a marketing campaign on their behalf, if this initiative is adopted by companies country-wide, it could make a huge difference by replacing plastic bags with paper bags and at the same time aiding the planting of trees. Moreover, the recycling system can be made so efficient that no plastic is left unrecycled, thus, growing the recycling industry in Pakistan could serve as a solution to this crisis. However, setting up numerous recycling plants would require economic and political stability with which it could be possible to work towards the ideal goal, taking one step at a time. Similarly, if the awareness campaigns work effectively, the public could even demand the construction of recycling plants and would be more willing to invest in it. However, the effectiveness of the alternatives could either be measured by investigating how many companies and industries are taking steps towards being environment-friendly or by getting the public’s opinion regarding the crisis of plastic pollution, which would highlight the effectiveness of the awareness campaigns. In addition to that, the total number of plastic bags sold can be calculated in comparison to paper bags to get a general idea of whether the public is changing its lifestyle. Plastic pollution is a big problem that cannot be tackled easily. It requires a lot of dedication, time and effort. Similarly, it requires bringing structural changes to the society and/or changing the mindset of the whole nation to fight this problem effectively. 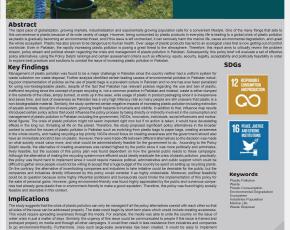