Pakistan is a developing country with a high rate of poverty. This poverty has forced many people to resort to begging to make a living. However, professional beggars have also started to resort to this profession leading to the creation of an economically wasteful class which is feeding off the work of others in society. Begging mafias have also developed their roots in the country. They force people to beg and use tactics such as kidnapping and forcefully disabling people to ensure that they gain more empathy from people. The children of beggars also tend to resort to begging as they never receive education and are instrumentalized by their parents and beggar mafias in most cases to gain greater sympathy of others. This leads to the destruction of the constructive capacities of generations as the profession of begging is passed on from parents to their children. Hence, it is the need of the hour that our government acts to curb down begging. Therefore, this policy analysis aims to critically review the problem stream, policy stream and political stream regarding the issues and control of begging in Pakistan. To serve this purpose, data was collected through interviews and survey questionnaires. Subsequently, various policy alternatives were proposed and evaluated using Policy Delphi rankings and certain assessment criteria such as effectiveness, cost, societal acceptance, sustainability and ease of implementation that could be effective in taking concerted action to hinder the spread of begging.

In Pakistan, begging was found to be a lucrative profession where a person could earn more than an unskilled laborer with relatively lesser effort. Although, the government of Pakistan passed multiple laws to criminalize begging, yet the number of beggars were found rising as more and more people resort to it as a means of living.  Moreover, it was found that Pakistan has a significant proportion of its population living below the poverty line which depends on welfare from the state and society, but professional beggars and mafias hinder the provision of welfare to these people. Further analysis highlighted major causes responsible for the growing plight of begging in Pakistan including poverty as people (i.e. disabled, unemployed, orphan children and socially excluded communities) who are unable to meet their basic needs are forced to seek help from others by begging, concept of charity since most of the country’s population is Muslim so they believe in Zakat and almsgiving to the poor beggars whom they consider to be needy, convenience or preference as many poor people, generation after generation, resort to begging as a profession because it is easier for them to earn more than an average skilled laborer, drug addiction since people resorting to the use of drugs also tend to beg on streets to earn money for satisfying their addiction, and organized crime as poor people and homeless children are often vulnerable to being abducted by criminal organizations who force them to beg and keep a certain profit of their earnings themselves. In addition to that, the study conferred significant negative effects of begging including creation of an economically wasteful class as people involved in begging tend to make their children resort to this profession, depriving them of a formal education and the development of their constructive capabilities, instrumentalization of children by beggars to increase the amount of empathy due to which poor children are bought, sold, rented, and/or kidnapped to work in organized or forced begging rings, sexual exploitation of vulnerable individuals since children and women involved in begging are prone to sexual assaults from pedophiles and sexual abusers, increasing mafias and organized crime that force people to beg by torturing and/or disfiguring them, exploitation of poor people for money since people in the streets are being coerced into begging and being forced to give the money they receive as charity from the poor to mafias. However, the results of the impact map presented that certain policy actors could influence the policy process as being directly or indirectly involved with the issues and control of begging practices including government, media, religious clerics, non-governmental organizations (NGOs), police, bureaucracy, criminal organizations, beggars, transgender community and civil society. Besides this, it was found that most of the beggars could get away with their activities by bribing the law enforcement officials who are under little pressure from the government to crack down on begging so the biggest consequence of no action on part of the government in current circumstances would result in the mushroom growth of the begging industry and the strengthening of organized mafias involved in begging. Therefore, the study proposed significant policy alternatives in the broader context, including implementation of a blanket ban on begging, legalization of begging while restricting it to specific areas, incentivizing the NGOs and religious organizations to set up rehabilitation and vocational training centers for the beggars, government action to reduce poverty, and no action policy. Since there were certain trade-offs between different alternatives, the decision was made considering the most important assessment criteria i.e. effectiveness, cost and ease of implementation. According to Policy Delphi results, the alternatives such as a blanket ban on begging and strong legal action against beggars, legalization of begging and reducing poverty were found to be very effective in tackling begging. However, it was found that the cost of reducing poverty in Pakistan would be very large. Moreover, the government lacks the political capital or incentive to invest a large amount into eradicating poverty. Hence, it would be impractical to use this policy to reduce begging. Similarly, a blanket ban on begging would not only increase the cost for the government but would also be virtually impossible to implement since many people in the country were found forced to resort to the profession of begging due to poverty and lack of any alternatives. Therefore, this would not be a sustainable solution. Although, the legalization of begging and regulating it would also require the establishment of separate centers for the government to monitor the beggars, it could be effectively implemented because the beggars would have an incentive to cooperate with law enforcement agencies to avoid being imprisoned. Hence, legalization of begging was found to be the most viable and sustainable policy action.

The government should pass legislation to legalize begging and restrict it to specific areas. This legislation should also include a guideline to form a separate department for the regulation and monitoring of these areas. Furthermore, one-time cost of installing cameras in these areas can be a viable option for ensuring that these areas are being monitored. The legislation should also include a penalty for those who do not follow the instructions of being in specific areas. Moreover, there should be a strong penalty for those people who are being accused of forcing people to beg. Forcing someone to beg must become a non-cognizable offense. Since the beggar mafias can operate due to a lack of government regulation on begging, therefore, when the NGOs and government will be able to keep a check on the areas that are being regulated by begging, it will become difficult for them to operate. Additionally, the government should back this legislation with an aggressive media campaign and take religious clerics into account on this issue to raise public awareness and make people aware of these laws. Subsequently, the government needs to carry out plans for the reduction of poverty, as well as incentivize the NGOs and religious organizations to visit specific areas designated to begging to help the beggars, raise awareness among them and provide them with vocational training if they are willing for it. This will also lead to increased awareness among beggars leading to a decrease in begging. However, the efficiency and effectiveness of these action plans could be monitored by checking whether people hardly find beggars in areas other than those that are designated specifically for begging, the media, civil society and NGOs have a presence in the areas which have been designated for beggars, and/or there is a decrease in the number of beggars in the country. 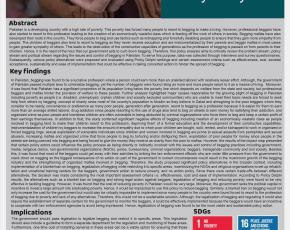