CONDITIONS OF SLUMS IN PAKISTAN ARE GETTING INCREASINGLY WORSE: Policy Analysis

With an increase in the world’s population, slums are spreading and increasing in size over time. The characteristics of these slums range from substandard housing, lack of basic facilities, and unhealthy living conditions. This has been a prevalent problem in Pakistan as well where these slums are referred to as “Katchi Abaadis” and are mostly inhabited by the laboring class, low-income families, and marginalized communities. Moreover, the conditions of these slums and the marginalized communities residing within are getting worse day by day due to overpopulation and urbanization, coupled with ineffective financial systems and lack of government intervention. This proves to be a significant problem as it is affecting the lives of millions of people worldwide, with an overwhelming majority within Pakistan since the residents of such deplorable areas do not even possess basic facilities such as clean drinking water or proper sanitation. Therefore, this report aims to critically review the various factors at play behind the emergence and deteriorating conditions of slums in Pakistan. Subsequently, this policy brief evaluated a set of effective policy alternatives using outcome matrix and certain assessment criteria such as importance, desirability, feasibility, efficiency, equity and security, in order to propose best practices and solutions for improving the social, economic and health standards of “Katchi Abaadis” in Pakistan.

The analysis identified major causes responsible for the deteriorating conditions of slums in Pakistan including poverty, increasing population density, social and economic inequalities as Pakistani society exists in a state of discrimination (more than half of the population is not even provided with good economic opportunities, no matter how capable the poor are, and they are being marginalized and disregarded due to unfavorable circumstances), government inaction since the state barely takes any responsibility for the residents of slums due to budget constraints, privatization of legalized status due to which the inhabitants of slums do not invest in their homes in fear that these settlements might be demolished anytime, lack of education and employment opportunities as people who migrate from rural areas to urban areas in search of jobs mostly end up settling in slum communities where most of them work as laborers or earn through begging on a daily basis. Furthermore, the study conferred certain negative impacts of the deplorable conditions of Pakistani slums including high death rates, increasing crime rates, increasing health hazards, increase in mental illness, increase in alcohol and drug addiction and increase in pollution. According to the influence map results, the policy actors like state, government and politicians were found having high influence, non-governmental organizations (NGOs) and businesses were found having moderate influence, and residents of the slums, architects and citizens were found having low influence on the policy process. Moreover, it was found that if ‘no action’ would be taken regarding this matter then the conditions would either remain the same or continue to worsen, leading to increased economic and social inequality, low-income families, health hazards, illiteracy, child labor, and poverty. On the other hand, these marginalized communities might also get motivated to bring their own change by evolving into bigger cities if people start investing and building with better planning, however, it would require a significant amount of time. Therefore, the study proposed significant policy alternatives in the broader context including provision of low-income housing, provision of legal status to the slums, establishment of schools in slums, non-governmental organizations and the common people providing help and facilities and no action. Since there were trade-offs between different alternatives, a decision could be made on what society would value more, and what would be administratively feasible for the government to do. According to the results of outcome matrix, the policy alternative that concerning NGOs and common people should help received the overall highest ranking, while other alternatives ranged over the ranks. Similarly, according to the alternative ranking results, society and people also ranked the alternative of NGOs and other people helping slums residents to be most important, desirable, equitable and feasible. This was probably because the other alternatives were long-term policy plans and required the involvement of several other policy actors. Although NGOs and common people helping was found to be the easiest and fastest action plan, it would not provide a long-term solution which is something that should be addressed by the government. On the other hand, taxing the rich for establishing low-income housing was ranked at the lowest since many problems could arise through increased taxes. However, if low-income housing was to be done through some other way, it would be higher up in the ranks of importance and desirability. Moreover, for the government, the most administratively and politically feasible policy alternative might be of low-income housing and establishment of small-scale schools since provision of legal status might be difficult to initiate.

Considering the severity of the problem and the overall worsening conditions for each different slum area, steps should be taken accordingly to ensure improvement. For an area where the conditions are deplorable as they do not have access to basic facilities like sanitation systems or even water drainage systems, the initial focus should be on improving the overall health conditions rather than improving the economic welfare by ensuring that these marginalized communities have access to basic health facilities and/or are not getting victimized due to the issues of contaminated water. Moreover, small-scale projects can be undertaken to build toilets, provide strong walls to the houses and to install some water-coolers. All this can be efficiently achieved by allocating enough budget to these plans. For already existing schools, there should be some measures for the accountability of teachers who are taking salaries in order to ensure the quality and standard of teaching. This can be done through surveillance cameras, keeping a simple record of the attendance and/or by giving training to the teachers. In this matter, productive results can be achieved with the help of NGOs and common people instead of putting the entire burden on the government. Furthermore, awareness about the bad conditions can be spread through campaigns and social media to encourage people to help through donations and taking on projects. Camps can also be constructed on monthly basis to screen people for specific diseases along with spreading awareness in them. However, in the long run, the government needs to take some responsibility and step in to act which could ensure at least some improvement. Budget cuts could be made for the projects that are not compromising the health of people such as the installation of metro bus or Orange Line. The money generated could be invested in the slums where the conditions are worse either to provide sanitation systems or to eradicate water borne diseases. Consequently, it will reduce the expenditure on health care. Similarly, the initial focus should be on reforming the primary health, education, and employment sector through corrective actions. For example, if the people are provided with clean drinking water, there would be a sharp decrease in overall water-borne diseases and deaths due to these. It is far less expensive to treat this than to treat recurrent diseases like typhoid and cholera.  Moreover, land subsidies could be provided to the people migrating from the rural areas and steps could be taken to facilitate self-help housing. Money could be invested to help the marginalized communities in building cemented houses. A few proper roads should be constructed in the slums with drainage systems. In addition to that, treatments should be offered to people who cannot afford them. Once the conditions are improved and these areas are made somewhat livable, steps can be taken to provide legal status to these areas so that people continue to improve their conditions without having the constant threat of demolition and/or of being displaced. Similarly, when their income increases, they will automatically move to a better place. However, overall progress for all these agendas could be noticed through different means such as surveillance, surveys, questionnaires and/or through overall monitoring of each new step taken to see the effect it is having on the people and the conditions. Feedback should always be taken from the people to see if a certain policy is being implemented and if it is working. Similarly, some government officials along with NGO workers should keep visiting these areas periodically to monitor the conditions and any changes in them. 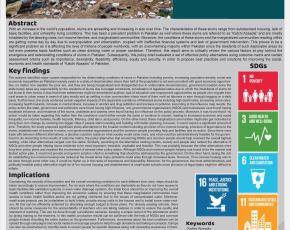