Pakistan is the world’s eighth largest market in terms of food related businesses. An average Pakistani spends around half of his/her income on food. There are approximately 25,000 restaurants in Pakistan and the industry is constantly growing which makes it even more important to explore its structure and the leading patterns. Therefore, the present study has focused on researching various trends in the restaurant industry and looked for issues faced by a religious minority (Christians) as well as women in the food service industry of Pakistan. To serve this purpose, six different restaurants were visited to study the culture and work environment in this context.

The growing Pakistani food chains reported to employ a large volume of Christians at all the three levels ranging from managerial to janitorial staff. However, the international food chains reported to have a moderate number of Christian employees either as kitchen staff or janitorial staff, but none of them was found to be working at managerial positions. Whereas, the traditional Pakistani food chains targeting the desi mass market reported to have very few Christians in their work force usually as a part of the janitorial staff. Furthermore, the analysis identified significant reasons to hire large number of Christians as an effective business strategy which include high professionalism and outstanding work ethic of the Christian community, high employee loyalty, fewer annual holidays and holy months, CSR and brand image, and low bargaining power of Christian employees. Similarly, the study highlighted certain frictions and issues faced by Christians in the restaurant community including the halal vs. haram debate and the discrimination in promotion for cultural sensitivity. Moreover, it was found that multinational restaurants employ more women at all levels as compared to other restaurants. These good numbers were found as a part of the vision to maintain certain gender ratios. Women also preferred to work in such environments due to strict sexual harassment policies, flexible timings, cross training facilities and lack of glass ceiling. On contrary, high end fine dining restaurants were found to employ less than 10% women in their workforce which were used to welcome diners into the restaurants. However, the desi restaurants employed no women, at any level, due to their inappropriate kitchen culture, less educated and poorly trained male staff and target market that could misbehave with women, thus leading to the cases of harassment and misconduct.

The research suggests that international food chains should step in and lay examples where Christians could make their way from kitchen staff to higher level branch managers. This would also reduce the negativity regarding Christians in restaurants among the general consumers. Furthermore, there should be no glass ceiling for religious minorities. Islamic Scholars should use the television media to educate Muslim consumers and shred beliefs of Haram. Similarly, Pakistani growing food chains should learn from their international rivals to create a better kitchen culture and work environment which could be comfortable for females, if they want to compete their standards. Moreover, the top management needs to believe in diversity and should be the champions of change. The local food chains should also provide flexible timings in order to attract females. There should be hiring quotas for females and restaurants should involve women in other productive activities rather than just portraying them as pretty faces at the reception. 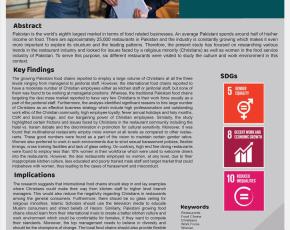