A Pakistani woman has to overcome several obstacles in order to leave her house, among which some factors vary for women of different backgrounds (based on economic class, ethnicity, religion, etc.) while others transcend such boundaries. This results in many women being completely prevented from entering the public sphere independently, casting adverse effects not only on her but also on the country’s economy and global image. The patriarchal structure of society, not just in Pakistan but across the globe, inevitably has many implications on the lives of women outside their home. It restricts their span of opportunities, for both work and leisure, with factors such as time, distance, and space etc. In other words, it limits the scope of their mobility and in doing so, takes away from the woman a fundamental right of being able to choose where, when and how she wants to be. The conventional gender discrimination against women, in the public sphere, has been subjected to heavy critique in recent years and as a result, workplaces, public spaces, public transport, and other infrastructures are becoming increasingly gender neutral all over the world. However, in Pakistan this is still a topic that has not been given much time in the limelight and remains problematic for women. Therefore, this paper aims to discuss the issue of women’s mobility in Pakistan, the challenges women face, the related consequences, and why and how the government can intervene to make the situation better so that a set of effective policy alternatives, using the Policy Delphi rankings based on certain assessment criteria such as efficiency, equity, welfare, liberty, security, legality, political feasibility/acceptability, and implementation, could be proposed within the context of Pakistan.

The analysis identified certain factors that hinder the mobility of women in Pakistan including cultural stigma that varies from region to region, chances of mixed gendered interactions, laws like Hudood ordinance, lack of women’s independent access to all modes of transport, especially motorbikes, class and social status, security issues at public spaces due to inappropriate infrastructure, threat of sexual abuse and harassment in the streets, workplaces or while using public transport, and work-life conflict. Furthermore, it was found that a very small proportion of women could take part in economic activity as compared to men due to the lack of mobility which means that virtually half of the population is financially dependent and/or restricted to very few career options such as teaching or home-based businesses. Furthermore, influence map results introduced certain policy actors that could impact women’s mobility, including family as it defines the circle a woman moves in (shaping her perspective about mobility), religious actors as they define the cultural response towards roles, freedom and authority of each gender, relatives as a representation of society, organizations that define the culture and policies of the workplace, harassers being a physical threat to women’s safety and security, women since they are the effected party and are striving for change in current norms by fighting for their rights, and NGOs for performing an integral role in female empowerment in Pakistan. Furthermore, the study proposed significant policy alternatives for the solution of the challenges faced by women in mobility, including segregated modes of public transport, better surveillance facilities through quick response teams and reporting apps, education and awareness through encouraging movements like #MeToo, destigmatizing the driving of motorbikes by girls, TV campaigns and curriculum amendments to reduce the stereotype around female driving, strict regulation regarding the repercussions of sexual harassment, and better public transport. However, the results of policy analysis showed that no single alternative came out to be wholly implementable or highly effective on its own, therefore, a scheme of different alternatives would have to be run in order to achieve any substantial change. This would require a strong political will since a solution to the challenges of female mobility was not found to be the top priority of the voting public. Moreover, it was found that if the government would not intervene, cultural norms would still change in the cyclical manner as they did in past, bending to the western influence that is increasingly stronger than the earlier middle eastern influence, coupled with greater education opportunities and more empowerment via social media.

This study suggests significant short term policy solutions including segregated modes of public transport which should be the focus of government policy especially in Punjab, in order to provide a safe mode for women to move in the public space with better surveillance facilities. Although this is already being implemented in the case of Punjab with the Safe City Project, however, it can be improved further by adding mechanisms for prevention such as an uninterrupted electricity supply to streetlights, special response police teams dedicated to take quick action on sexual harassment cases at a larger scale, and reporting apps to report sexual harassment cases so that the community becomes aware of such areas. Furthermore, since cultural stigmas are the most fundamental barriers to female mobility in Pakistan, educating and creating awareness among people through self-defense trainings, encouraging movements like #MeToo, destigmatizing the driving of economical vehicles like motorbikes by girls, introducing TV campaigns and curriculum amendments to reduce the stereotypes related to female driving, and training and educating bus/train conductors and drivers regarding the repercussions of sexual harassment can be the most crucial long-term policies that the government should deploy to fix the problem at its core. In addition to that, provision of better public transport can not only improve the quality of life for many people regardless of gender but can also act as an incentive to use lesser private automobiles, creating a positive impact on the control of air pollution, while also helping women be more mobile. 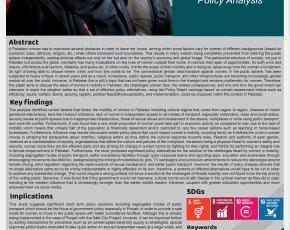