A CASE FOR POLICE REFORMS IN PAKISTAN: Policy Analysis

In Pakistan, federal as well as provincial police services are responsible for carrying out law enforcement through three autonomous yet interdependent entities including police, courts and prisons. Although the police services exist to establish the writ of the state and provide justice to the populace by maintaining law and order, yet in Pakistan, police infrastructure is one of the most poorly managed organization in the state. Furthermore, a level of distrust exists between citizens and the police since the police is aptly described as ill-equipped, poorly trained, deeply politicized, unnecessarily brutal and chronically corrupt. Therefore, police reforms have emerged as a major priority for the Pakistani government in recent times, especially since an impartial and capable police force is crucial for further social and economic development of Pakistan. It is also because the state has witnessed a deteriorating law and order situation in Pakistan, particularly due to the rise in religious extremism and terrorism along with economic inequality. This has shown that the police services are increasingly incapable of maintaining law and order. In this context, the present paper aims to explore the current situation of police reforms in Pakistan so that a set of effective policy alternatives, using the Policy Delphi rankings based on certain assessment criteria such as efficiency, equity, welfare, liberty, security, legality, political feasibility/acceptability, and implementation, could be devised in order to improve the situation of law enforcement in country.

The findings addressed that the police system in Pakistan is not too flawed to fix and even the police service was found to be in favor of improvement. Similarly, the analysis identified certain causes for the ineffectiveness of the police in Pakistan, including insufficient recruitments and scant resources as the police to population ratio in the country is inadequate in dealing with rising crime rate, institutional disconnect as lack of coordination among provincial police services often leads to poor information sharing and ineffective monitoring of criminal activities, political challenges as the police is often used by the state to suppress dissent and demonize the opposition, disregard for human rights since the high rate of crime has motivated an ill-equipped police force to choose torture or even killing as an easier way to get rid of criminals, lack of modernization, poor public image, and corruption. However, institutional lethargy, high cost and time required for restructuring, and lack of political and administrative will were found to be the major restraining forces for reforms in the Pakistan police system. Furthermore, influence map results depicted certain policy actors that could influence the policy process, including government, police services, and citizens/civil society. In addition to that, the study proposed significant policy alternatives for the police reforms, including improved salary and working conditions of the police, fixing the shortage of police personnel, improved recruitment and training of officers, increased accountability, improved public image of police, and reform in the criminal justice system. Trade-offs existed between the different alternatives, primarily due to conflicting effects on different criteria. Improving salary and working conditions of the police conflicted with the alternative of increasing the number of police personnel in terms of efficiency. However, it was found that society would prefer a better equipped and better functioning police service that is capable at its job rather than more personnel without the same level of performance. Both options were found to be administratively difficult, however, political favorability was most likely to favor increased police personnel. Similarly, improving public image and improving recruitment and training were also found conflicting in terms of equity and security. However, both were found feasible politically and administratively, yet improving public image might be slightly favored more by the political rulers whereas society could value the latter alternative more since better recruited and trained personnel could help them directly by alleviating their problems, which could also lead to an improved police image in the long-term. Conclusively, the policy alternatives of increased accountability and improved salary and working conditions were found to be the most viable options since they ranked highest as per the Policy Delphi Survey.

This study suggests that if political will is present then relevant legislation must be passed to make the police reforms official. The administrative bureaucracy must be given clear short and long-term goals in order to implement the reforms in full. The short-term goals can include rise in current wages of police personnel, increased budgets for next fiscal year and improvement in equipment and inventory. In addition to that, performance levels should be checked electronically, through assessing the speed and volume of filing and resolving first investigation reports (FIRs) and keeping a check on police logs and registers. Citizens of a locality could also be surveyed and interviewed to check their satisfaction levels with the police personnel of the area. A complaint line directly to police superiors or senior administrators could be opened for citizens to file complaints if they witness any wrongdoing. In the long-term, structural changes should be carried out in how crime is reported, recorded, and investigated. Collaboration with the session courts is needed to ensure proper dispensation of justice and prosecution. The police institution itself can be the best judge of how effective reforms have been. They can evaluate and monitor the situation along with other government functionaries and independent experts. Although reforms may take time and use up a lot of resources, if political will and public support are present then the whole society can ultimately benefit from them. 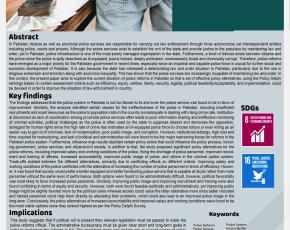