Biohazard waste such as infectious materials, medical waste and blades etc. are becoming an imminent threat to the socio-economic well-being of the masses, not only in Pakistan but worldwide since it leads to deteriorating environmental standards and uncontrolled movement of waste. Previous research confirms that Pakistan produces approximately 48 million tons of solid waste per annum, majority of which is generated from the various metropolitans. Moreover, waste dumps across industrial sites throughout the country are in clear violation of SEPA (Sindh Environmental Protection Agency) rules and all environment-related legislations. However, as a signatory to Basel Convention, Pakistan needs to curb the volumes of biohazardous waste with an effective regulatory mechanism to conform to global standards. Therefore, this policy brief aims to review major causes and consequences of increasing biohazard waste in Pakistan to build up the urgency and present the importance of this issue. To serve this purpose, data was collected through interviews and survey questionnaires. Subsequently, various policy alternatives were proposed and evaluated using Policy Delphi rankings and certain assessment criteria such as efficiency, equity, security, legality, welfare, political feasibility and acceptability and implementation that could be effective in regulating and/or managing biohazard waste disposal in the country.

The findings identified several causes leading to biohazard waste generation including lack of comprehensive waste management system as Pakistan Environmental Protection Act 1997 needs to be revisited in order to incorporate a scientific approach towards solid waste management and proper policy implementation, inadequate resource allocation, lack of legislative framework due to inter-agency coordination where federal and provincial agencies are reluctant to pursue waste management plans collectively, and negligence based malpractices across various tiers in public and private agencies as mostly health care workers in Pakistan are neither privy to infectious waste management nor trained to handle infectious waste. Moreover, Pakistan could not develop an effective waste management mechanism due to the inadequate warning signs or symbols at landfill sites, tampering with safety and precautionary devices and lack of willingness of public sector officials since an effective mechanism can result in transparency reducing discretionary powers of various policy actors. Further analysis conferred certain negative consequences of the mismanagement of biohazardous waste disposal in Pakistan such as transboundary movement of hazardous waste due to collusion of custom officials and untraced movement of waste disposal, demographic and socio-economic constraints in pursuing growth, and deep penetration of infectious elements. In addition to that, certain policy actors were also highlighted that could influence the policy process as being directly or indirectly involved with the generation and/or management of biohazard waste in Pakistan including public sector agencies such as PEPC (Pakistan Environmental Protection Council), Ministry of Planning, provincial environmental agencies, tehsil municipal corporations, and cantonment boards etc., as well as private sector agencies including Sustainable Policy Development Institute (SDPI), global think tanks, development and research organizations such as World Health Organization (WHO) and members of the academia. However, it was found that if the incumbent authorities failed to tackle the existing waste management issue, it might lead to deteriorating health standards as prevalent infectious elements would penetrate through the current population that might affect generations to follow. Therefore, the study proposed significant policy alternatives in the broader context including implementation of strict punishments, launch of mass awareness campaigns, strategic partnerships with global waste management companies, waste categorization for separation of hazardous and non-hazardous waste, usage of energy mechanisms to convert waste to energy, and plantation and placement of green caps near and on waste dumps. Since, there were trade-offs between different alternatives, a mix of all the possible solutions would be needed to tackle the problem effectively and efficiently. However, according to the alternative rankings, mass awareness campaigns were found to be the best suitable policy alternative. On the contrary, global partnerships would be the most difficult to implement because of high costs and opposition by the local companies, so it was found better to bring about change in the local system. Moreover, plantation and green caps were found to be the least efficient option, strict punishments scored the lowest rank on acceptability as there would most definitely be some opposition to punishments in political and social contexts, waste to energy mechanisms was found as the least secure option, and separation of hazardous from non-hazardous waste scored low on the criterion of legality while no action would be the least feasible solution in current context.

The study suggests that the most practical approach would be to start by placing more banners and boards on the roadside, running advertisements, conducting seminars and generating social media content to raise awareness. After a certain hype has been created on the matter and the policy actors start recognizing it as a severe issue, long-term training programs related to biosafety management should be given, and waste categorization should be taught so that there is a successful separation of hazardous and non-hazardous waste. Moreover, separate storages for these wastes should be set up so that from the moment of disposal, significant measures can be taken to keep biohazard waste away from the range of people. Similarly, the government must ensure formulation of centralized waste management rules as well as effective implementation mechanism for already existing waste management policies. In addition to that, strategic waste management partnerships with global waste management companies could further aid in this regard as government can outsource waste management to these companies. Similarly, regulatory agencies can determine the respective responsibilities of both the producer and consumer. Each party needs to be allocated with hazardous waste quota. Furthermore, transboundary movement of waste can be monitored through strict enforcement of rules and checks and balance at bordering regions. Besides this, waste needs to be handled properly as heavy metals in medical waste need to be stored separately, cytotoxic waste should be stored in strong leak-proof containers, whereas, radioactive elements must be sealed with a radiation warning label. Moreover, plants should be set up to ensure that waste is converted to energy rather than debating where to dump it. Meanwhile, warnings should be issued to those in violation of the law and if they continue such practices then fines should be issued. Moreover, negligence and transgression could further lead to severe punishments like imprisonment for a set period. After the proper implementation of all these action plans, progress must be monitored to check if improvement is observed. Each province can be divided into zones, and there should be a team for every zone that checks for the problems that people face and records violations, if any. Similarly, a centralized response unit should be formed to deliver weekly visits to more affected locations and continuous trainings should be conducted. Moreover, success could be measured over time by noting the overall conditions of each zone and documenting the improvements. 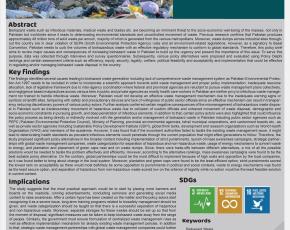