Although animals have the capacity to feel pain and pleasure, yet animal rights are being neglected in most of the developing countries around the world, including Pakistan. It is believed that humans are morally superior to animals, thus entitled to inflict suffering on them when deemed necessary i.e. for food purposes. Despite that, Pakistan adopted the animal rights act from the two governing constitutions, including Government of India Act 1935 and Indian Independence Act 1947 which were formed in the light of the British constitution. However, the government has failed in the implementation of such laws. Recently, Pakistani media with the help of animal welfare NGOs has shed light on the commonality of animal abuse in the country. Therefore, this policy brief aims to critically review the problem stream, policy stream and political stream regarding the need of animal rights, awareness and implementation in Pakistan. To serve this purpose, data was collected through interviews and survey questionnaires. Subsequently, various policy alternatives were proposed and evaluated using Policy Delphi rankings and certain assessment criteria such as efficiency, equity, security, welfare, legality and implementation that could be effective in improving the animal welfare situation currently prevailing in Pakistan.

The formally reported cases of animal abuse were found non-existent in Pakistan since people had little to no awareness regarding animal rights and animal laws. Further analysis highlighted that raging out on innocent animals had been a trend in Pakistan since the past few years especially during government elections. Moreover, animal testing, which is prevalent in the cosmetic industry, was found to be another common practice of animal cruelty. All these acts of animal abuse were found happening in the presence of “The Prevention of Cruelty to Animals Act of 1890” which showed that the government had failed in the awareness and implementation of these laws and provisions. However, force field analysis highlighted that there could be certain driving forces to bring about the proposed change with proper implementation of animal rights in Pakistan such as awareness of animal emotions through NGOs, increasing international animal welfare laws, positive media influence and Islamic shariah law regarding the protection of animal rights, whereas, there could also be certain refraining forces such as the school of thought that animals are emotionless, lack of basic human rights, impending civil and criminal cases and unequal resource allocations by the government. In addition to that, the results of impact mapping matrix presented certain policy actors that could influence the policy process as being directly or indirectly involved with the issue of animal rights including government, NGOs, animal welfare organizations i.e. PAWS, Ayesha Chundigar Foundation (ACF), Animal Safety Organization Pakistan,  pet owners, pet shops, veterinary doctors, working animals and their owners, poultry and livestock animal owners, stray animals, animal entertainment industry, drug/cosmetic industries, local residents and media. Moreover, it was found that overpopulation of stray animals would occur if no proper action (i.e. spaying/neutralizing animals) was taken by the government in time which would adversely affect the living standards of animals as well as the residents, especially in slums, where unhygienic conditions would increase greatly. Therefore, the study proposed significant policy alternatives in the broader context such as establishment of existing and/or new NGOs with the affiliation of international animal welfare organizations, International Animal Rescue (IAR) and International Funding for Animal Welfare (IFAW), establishment of international animal welfare NGOs chapters in Pakistan i.e. International Funding for Animal Welfare (IFAW) and World Animal Protection, increasing awareness by making animal welfare education a part of the school curriculum, introducing amendments in current animal protection laws and its implementation, spreading awareness through media, practicing the act of neutering, and establishment of animal welfare committee by the government. Since there were certain trade-offs between different alternatives, the decision was made considering the most important assessment criteria i.e. welfare, implementation and efficiency. According to the alternative ranking results, establishment of international NGOs ranked as the best suitable option, as despite being a lengthy legal procedure, it would ensure maximum results. However, introduction of amendments and new laws got the second last rank, as even if the laws were passed, the strict implementation would be hard to achieve in the context of the current slow legal process of Pakistan

Although, establishment of the affiliation of local and international animal welfare NGOs got a high ranking, this action plan will not be sustainable in the long run since the international NGOs have no direct stakes involved in Pakistan. Whereas, establishment of chapters of International Animal Welfare NGOs is a lengthy process, yet it will be more efficient as compared to the former action plan as these international chapters will have their reputation as well as their investment at stake. However, the affiliation alternative should only be preferred if the establishment of the international chapters cannot be executed for some unforeseen reasons. This alternative will give fruitful results in the short and the long-term as these NGOs will be responsible for the overall animal welfare in Pakistan. Furthermore, funding will not be a problem since people tend to trust international organizations more if they have been successful in the past and these NGOs can also bring in international investment as International Funding for Animal Welfare (IFAW) is doing, which collects the funds from developed countries i.e. United Kingdom and uses the funds in developing countries i.e. Africa. Moreover, in the long-run, media should take the lead with educational documentaries for all ages to gain sympathy from humans for the animals. Similarly, educating children on animal rights can be an effective policy plan which will bear results in the future. Furthermore, the current laws are not relevant in terms of the punishment/penalty. The monetary fines should be increased to at least PKR 5,000 and above so that people refrain from mistreating or killing animals. Jail term should also be introduced in these laws. Similarly, if the police force cannot handle the animal abuse cases due to limited resources and/or the large number of cases regarding human crimes, then then government should make a separate committee which would be responsible for handling all the animal related cases. This committee could also be responsible for spreading awareness about animal rights. The key performance indicators (KPIs and MOs) can be used further to evaluate the number of reported cases against animal abuse. Initially, a high number would depict the level of awareness among people that animal abuse is a crime. Subsequently, the focus should be shifted to decrease the cases of animal abuse. In addition to that, different surveys should be conducted by the government or NGOs in which questions about animal rights awareness, the estimated number of stray animals in the locality and the condition of working animals in the vicinity could be asked. This would not only measure the need of attention in different localities but would also showcase the outcomes of the initiatives taken by animal welfare NGOs and their effectiveness. Moreover, if the government could endorse the act of neutralization (removal of reproductory organs of the animals through a safe medical procedure) on stray animals, this would have a positive impact on the overpopulation of stray animals and would be better than brutal alternatives like poisoning and shooting. 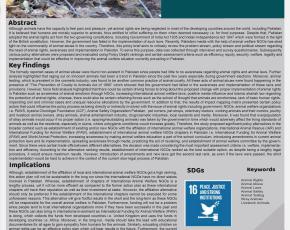